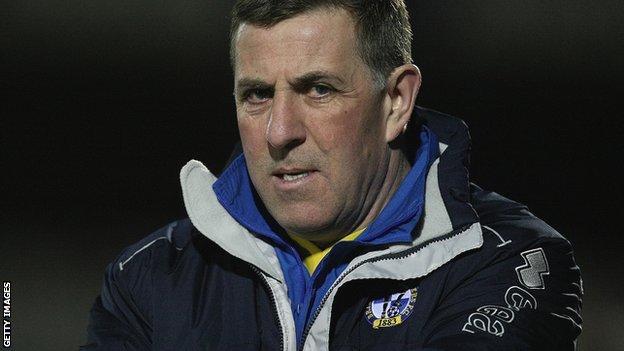 Bristol Rovers manager Mark McGhee says he would like to re-sign all the loan players currently at the club.

The Pirates currently have six loanees on their books although only Tom Parkes and Matthew Lund were signed by McGhee.

Michael Poke, Aaron Downes, Andy Dorman and Cian Bolger were brought in during Paul Buckle's eight-month tenure at the start of the season.

"All of the players we have on loan now, I would sign them for next season," McGhee told BBC Radio Bristol.

"I don't think we need anymore than they give us.

"It's not possible at the moment, and in some cases it's not probable, but that's the standard we want to set."

And McGhee would be keen to tie up the players to longer-term deals rather than month-by-month contracts.

"When players come for a year, they roll their sleeves up and become part of the squad and they think of themselves as here, rather than worrying about when they're going back," he added.

"It's the best way to have a longer loan but once you do that you're committed and therefore you have to get it right."

Meanwhile, striker Kayne McLaggon has been ruled out for the rest of the season with a serious hamstring injury.

He has made only two substitute appearances for Rovers this season but McGhee insists the youngster will still have an opportunity to prove himself at the League Two club.

"It's a very unusual injury - the hamstring has detached completely behind the knee," said McGhee. "The surgeon himself has never seen it. We're concerned for the boy but we'll get him back to fitness.

"He won't be thrown out on the street. The boy will be fit and able to give us an impression before we make a decision about his future."