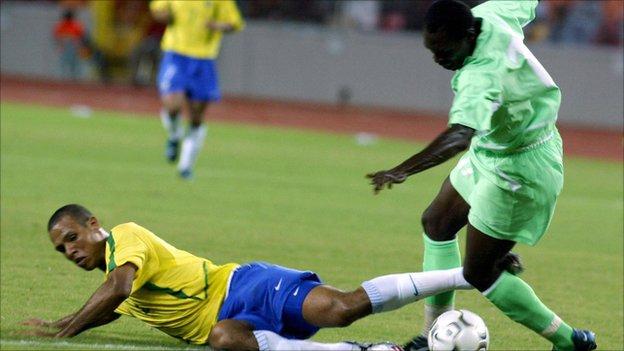 Nigeria have lined up a prestigious friendly against Brazil in September, the Nigeria Football Federation (NFF) has confirmed.

According to the NFF, the game against the five-time world champions between 7-11 September in the capital Abuja.

"The friendly has been confirmed by the organisers and there will be a press conference to reveal details soon," said NFF spokesman Ademola Olajire.

It's going to be good preparation for the team

"It's from the same sponsors and organisers of the Argentina friendly last year and we are delighted with the opportunity of facing yet another football giants," Olajire told BBC Sport.

Last June, Nigeria hosted Argentina, who fielded a second-string side experimenting for the Copa America in a high-profile friendly in Abuja, winning 4-1.

Four months later, Argentina gained revenge for that loss to Nigeria by defeating the Super Eagles 3-1 in Bangladesh.

Nigeria will use the match as part of preparations for the 2013 and 2014 Nations Cup and World Cup qualifiers respectively.

"It's going to be good preparation for the team," Nigeria coach Stephen Keshi told BBC Sport.

"We appreciate the sponsors' support and we are going to prepare well by focusing on our qualifiers to enable us put a strong team that will face them."

An official of the NFF has been quoted by local Nigerian media as saying Brazil will get $1.5m as appearance fee.

Meanwhile, a relative peace has been restored to Nigerian football after aggrieved parties agreed to withdraw their cases against the country's authorities from court.

The agreements were reached Tuesday after a series of meetings between the parties: the NFF board, sports minister Bolaji Abdullahi and secretary to the government of the federation, Anyim Pius Anyim.

Nigeria's Super Eagles are trying to revive their flagging fortunes after their failure to qualify for this year's African Cup of Nations.

But court cases, infighting and government interference in the administration of the NFF have overshadowed plans to revitalize football in the country.