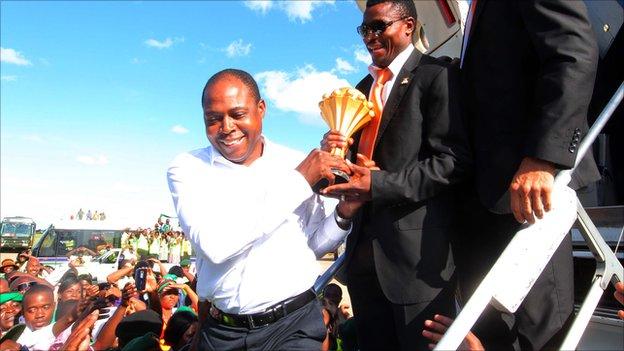 Kalusha Bwalya believes several Zambians must use the historic Africa Cup of Nations triumph as the stepping stone to successful careers in Europe.

"It's a big honour for our country to be African champions and I'm sure there are big teams who have taken notice of their talents," Bwalya told BBC Sport.

"Our players have arrived now," added the African Footballer of 1988.

"They showed they can play good football and I'm sure their success will give them the motivation to go on to better things."

Perhaps remarkably, seven of Zambia's victorious squad are now on the books of Congolese side TP Mazembe.

Shortly after the tournament, the four-time African champions snapped up teenager Nathan Sinkala on a three-year deal.

But Bwalya - who spent almost a decade in Belgium and Holland playing for Cercle Bruges and PSV Eindhoven - thinks it is time for a number of the Chipolopolo squad to test themselves on a bigger stage.

"I played in Europe for a long time and I know that none of our players would disappoint anyone," he says.

"It's just a matter of going to the right club and finding a coach who believes in you. But I'd rather that they give it a try and fail than never know what might have happened."

Central defender Stoppila Sunzu and winger Rainford Kalaba have been attracting most attention from European scouts, with the latter having signed for Mazembe last year after a failed spell in Portugal with Braga.

But with Mazembe aiming to regain the African Champions League, which they won in 2010 before losing it last year after an unexpected disqualification, Kalaba's agent Graham Heydorn warned they will not let him leave without a fight.

"Rainford is very ambitious but home is important to him, so it's going to be a toss-up that will depend on a few offers that have been seen and are potentially coming.

"There's been enquiries from a few different places but after his performances for them over the past two years and in the Nations Cup, Mazembe don't want to lose him."

Despite his penalty miss in the shoot-out victory against Ivory Coast, Bwalya expects Kalaba to be the first member of the triumphant squad to be snapped up.

"He has always played at a high level and when Rainford is on song, our team is on song," he said.

"Over the last three years, he has been outstanding for the national team and now I'm sure he will get a chance to go back to Europe.

"There are a lot of players from other African countries who have done very well there recently so hopefully Zambians can do the same now because it will only help the national team get stronger."