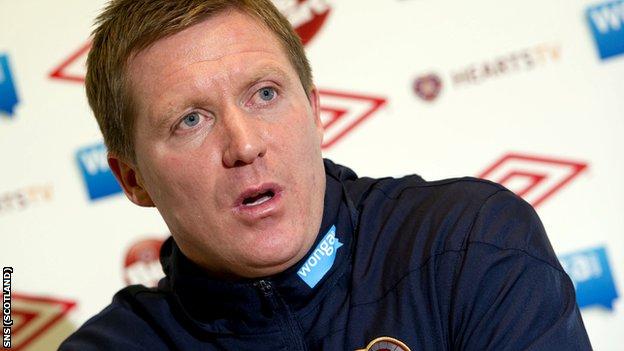 Hearts assistant coach Gary Locke believes Hibernian are much stronger now than when the Edinburgh rivals last met in January.

"They have brought in a lot of players," Locke told BBC Scotland ahead of Sunday's meeting at Tynecastle.

"The reports we have had from their games is that they are an improving side and they are definitely a lot stronger defensively.

"We know it will be difficult. It's a big, big game for the club."

It was May 2009 when Hibs last recorded a derby victory. Since then, managers Mixu Paatelainen, John Hughes, Colin Calderwood have departed.

And current Easter Road boss Pat Fenlon has already tasted defeat in the fixture, having seen Hearts knock in two late goals to prevail 3-1 on 2 January.

And Locke is looking forward to locking horns with a man who has had a great influence on him throughout his career.

"I consider Billy as a close friend and I still speak to him regularly," revealed the former Hearts skipper.

"Hopefully, when I phone him next week it will be me that has the bragging rights.

"It is strange seeing him in a Hibs tracksuit.

"He is a fantastic coach and a fantastic assistant manager. His knowledge, particularly in the Scottish game, is unbelievable.

"It certainly doesn't surprise me that Hibs have picked up with Billy being there.

"As soon as I knew Billy was getting the job there I knew that he would turn things around.

"I think this will be a different derby from the last couple."

Hearts captain Marius Zaliukas is out through suspension and David Templeton is still missing with a groin injury. Adrian Mrowiec is a doubt with a knee problem but Jamie Hamill returns from suspension.