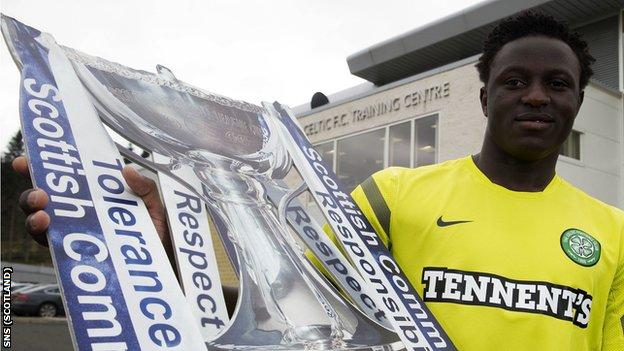 Celtic star Victor Wanyama is hoping for his first trophy when his side face Kilmarnock at Hampden on Sunday.

The in-form Kenyan is aware of the occasion and of the increased attention back in his native country.

He said: "If we can win it would be very good for me as it would be my first trophy in professional football. It's something I've been dreaming of.

"Everyone in my country knows about it and everyone is wishing me to win my first trophy."

Wanyama acknowledged that the club's reputation in Kenya has helped to raise his own profile because of their various charitable efforts there.

The young midfielder also believes that any talk of the treble has to be put to one side.

He added: "We just have to take things game by game and then we will see at the end what will happen.

We have three different-class players in the position, so it's always going to be tough to hold your place

"Everybody has been working hard. We have reached a final now so we have to show we can win it."

Welsh team-mate Adam Matthews is also chasing his first piece of silverware and is hoping to have done enough to convince Neil Lennon to pitch him in from the start.

"Everyone who has come in at right back has played well," he said.

"We have three different-class players in the position, so it's always going to be tough to hold your place.

"But hopefully I justified myself against Dundee [United] and can keep my place for the final."

Matthews was in the squad when Cardiff lost in the 2010 Championship play-off final to Blackpool and knows all about the disappointment of not being involved.

'This will be my first final," he added.

"I was involved in the play-off with Cardiff but I didn't play.

"It is the hardest thing for a player when you miss out on a final.

"This is the main one and hopefully I can play in it but it's the gaffer's decision."