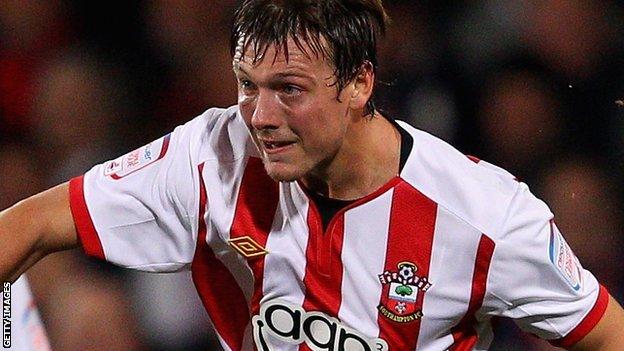 Swindon loanee Lee Holmes has revealed he would be interested in making a permanent move to the County Ground.

The 24-year-old Southampton winger rejoined the Robins for his second spell on Wednesday, and will now stay until the end of the season.

"There's little things that have been spoken about," he told BBC Wiltshire.

"The time I had here before I really enjoyed and the fans were great to me. It's something I'd like to have if Swindon will have me."

Holmes's first loan spell with the club came when he was 17 in the 2004-05 season. He made 16 appearances - scoring once - and won young player of the year during his five-month spell.

He was contracted at Derby County at the the time but joined Southampton on a free transfer in 2008 following his release from Pride Park.

Holmes has spent the last month on loan at Swindon's rivals Oxford United, but opted to join the League Two leaders for the final 11 games of the season.

"Football is a strange world," he continued. "I played there [Oxford] for a month and enjoyed my time but then this came up and here I find myself.

"The manager [Paolo di Canio] spoke to me before I came and was very positive. He seems like he is on the touchline - very passionate and he puts that across in training.

"It's got the same feel as it did the first time I was here so I'm quite excited."