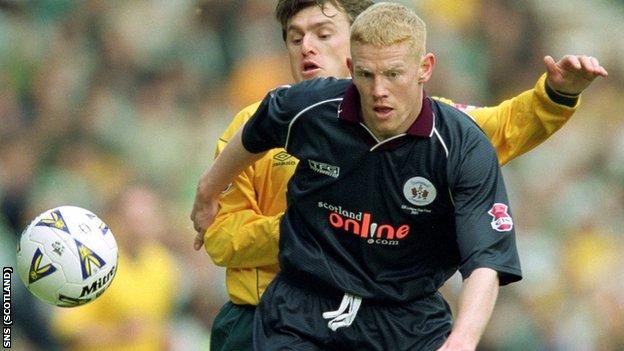 Gary Holt is used to being "bossed" by Paul Lambert.

The 38-year-old former Scotland midfielder is a youth team coach at Norwich, where Lambert is the manager.

And he seldom got the better of his Carrow Road gaffer when the pair went head-to-head on the field of play.

One such occasion was Holt's last match for Kilmarnock; a 3-0 League Cup final defeat to Celtic in 2001.

But Holt reckons his former club are capable of springing a surprise when they meet Celtic once again at Hampden on Sunday.

"I had many a great midfield battle with Paul Lambert, but didn't get the better of him very often," Holt told BBC Sport.

"He was a class player and, unfortunately, he had the last laugh in 2001.

"Obviously Celtic are huge favourites going into Sunday's final. They're top of the league and playing great football, so Kilmarnock will have to put in a great performance to beat them."

Ayrshire-born Holt, who spent two years at Celtic without breaking into the first team, spent six seasons at Rugby Park.

Eight matches have passed between the sides since Kilmarnock last beat Celtic, with Chris Maguire netting the only goal at Rugby Park in February 2010.

Kenny Shiels' team looked on course to chalk up another victory when they were 3-0 up at half-time last October but Celtic hit back to earn a thrilling draw.

If Kilmarnock are to succeed at Hampden, Holt believes it might be better to take a more defensive approach but concedes the loss of skipper Manuel Pascali through injury has weakened the underdogs.

"Manuel Pascali has been a huge player for Kilmarnock and he'll really be missed in a game like this," added Holt.

"But it will be a battle, there's no doubt about that.

"Kilmarnock went to Ibrox a few weeks ago and got a win so they can use that as motivation on Sunday. There's no reason why they can't keep things tight and sneak a 1-0 win.

"Kenny Shiels has done really well and instilled a great style of play. It's been a great cup run and who's to say it will end on Sunday."

Holt forged a successful career with Norwich and Nottingham Forest after leaving Killie and went on to have spells at Wycombe and Colchester, before ending his playing days with Lowestoft Town.

But he keeps a keen eye on developments in his homeland and hopes a cracking cup final will lift some of the gloom surrounding the game since champions Rangers went into administration.

"There's been a lot of negativity about the future of the Scottish game, given what happened to Rangers, but a good final between two good teams could get everyone focusing on what's great about Scottish football again."