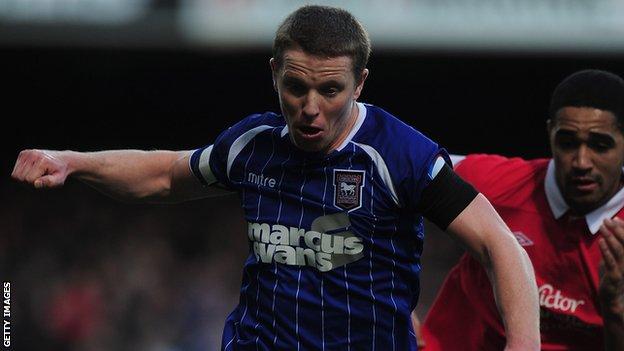 Ipswich Town boss Paul Jewell believes it will be difficult to keep hold of Grant Leadbitter beyond this season.

The 26-year-old, who has featured 117 times for Town since joining from Sunderland in September 2009, is out of contract in the summer.

"We have not had much dialogue, I've got to be honest," Jewell told BBC Radio Suffolk.

I spoke to him on Tuesday. I told him we've dealt with it, we don't hold grudges

"We'd like to keep him. That might be difficult but that's his prerogative and I have no arguments with that."

After starting all but one of Ipswich's first 18 games of the season, Leadbitter was sidelined by injury and later left out of the side, with Jewell preferring Luke Hyam and Andy Drury in central midfield.

But he has returned to the fold in Town's last three outings and netted both goals in Saturday's 2-2 draw at Hull City.

Jewell says talks over a new deal have stuttered after initial conversations in August.

"At the start of the season I think there was an offer made to his agent," he said.

"They wanted to see how the season went I think. But you can see by his attitude he doesn't have a problem with it.

"I just want him to play well between now and the end of the season."

Meanwhile, Jimmy Bullard will return to training on Friday after serving a two-week club suspension for arriving late for training following a night out.

The 33-year-old midfielder is not expected to feature in Saturday's visit of Peterborough United.

"He won't be in contention for Saturday," said Jewell.

"I spoke to him on Tuesday. I told him we've dealt with it, we don't hold grudges.

"He's very apologetic and he knows he upset me and he's upset about it himself."