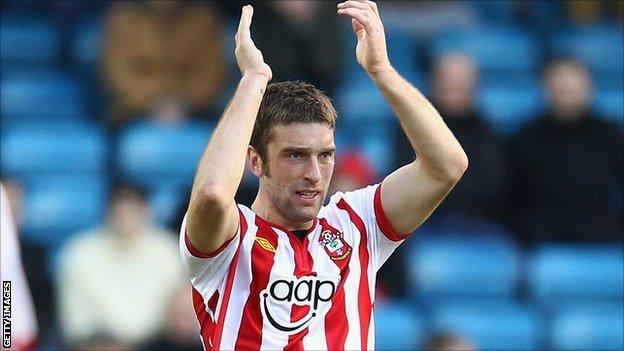 Southampton striker Rickie Lambert says the Championship leaders can handle the pressure of chasing Premier League promotion, as they enter the run in.

With 10 games to go leaders Saints are two points clear of Reading.

"We are thriving on the pressure, there is a lot of expectation on us to get promoted but we can handle it," Lambert told BBC Radio Solent.

Lambert, who on Sunday was voted Football League Player of the Year, added: "Each game is getting more intense and more exciting.

The pressure will be on, but we've handled that all season. We've got the confidence to take that into the last 10 games

"I'm loving it and I think the players are loving it.

"It was the same last season and we thrived on that pressure and hopefully we can do the same this season."

Southampton were promoted from League One last campaign and are favourites to go up for a second successive season.

But with games to come against promotion-rivals Hull, Reading, Middlesbrough and Blackpool as well as a derby match against Portsmouth, Lambert knows there is still a long way to go.

"There are 10 games to go and if you have a good run, it does not matter if you are not in the top two, you can still go up automatically," he said.

"Likewise if you have a bad run you can drop out.

"If we beat everyone else's form from here on we win the league. Simple as that.

"Obviously that is what we are hoping to do but we know we have got some hard teams in that run in.

"The pressure will be on, but we've handled that all season. We've got the confidence to take that into the last 10 games."

After a mini blip Saints seem to have rediscovered their early-season form and have been rejuvenated by the arrival of Japanese striker Tadanari Lee.

And Lambert admits the 26-year-old has had a big impact since his arrival from Sanfrecce Hiroshima.

"Tadanari is brilliant and he has done really well since he came in," said Lambert.

"It must have been very hard for him to come over from Japan and settle in.

"But he has taken to English football brilliantly and the fans seem to have really taken to him.

"Some partnerships take time, we don't speak the same language but he does have an interpreter and he is never shy to ask questions."