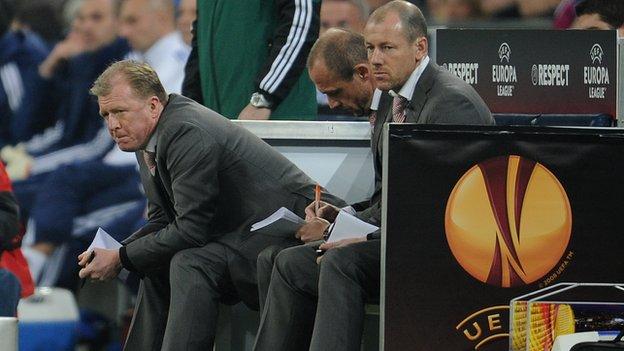 Trailing 1-0 on the night and 2-0 on aggregate, the German team scored four unanswered goals to win the tie 4-2.

Another Dutch side AZ Alkmaar played most of their game against Udinese with 10 men but held on for a 2-1 defeat that sent them through 3-2 overall.

Both Manchester City and Manchester United went out of the competition.

United's 2-1 defeat at Bilbao meant they were 5-3 aggregate losers, while City's dramatic 3-2 victory against Sporting Lisbon was not enough to prevent them going out on away goals.

Twente, already leading 1-0 from the first leg, went ahead early on at Schalke as Willem Janssen slotted in following a lightning counter-attack, meaning their opponents needed to score three.

Huntelaar started the comeback by levelling on the night with a back-post header before the break. And he rattled the Dutch team again with a 57th-minute penalty after a Janssen handball.

And when Huntelaar completed his hat-trick - finishing after a swift break - the turnaround was complete.

It was a far better night for another Dutch side AZ despite having Nick Viergever dismissed in the second minute.

Di Natale added his second with a poacher's finish from Giovanni Pasquale's cross after quarter of an hour. But the visitors led again overall when Erik Falkenburg skipped through the Serie A side's defence and fired in just after the half-hour.

That away goal meant Udinese needed two more, but they still had an hour to get them and it took a hard-working AZ rearguard action to keep them out.

It could have been even more comfortable but Rasmus Elm missed a penalty for the Dutch team.

At the quarter-final stage, no teams are seeded and clubs from the same country can be drawn against each other. The quarter-finals are played on a home-and-away basis on 29 March and 5 April with the semi-finals on 19 and 26 April.

Olympiakos's remarkable 10-game run without conceding came to an end against Metalist Kharkiv, who scored twice late on to complete a thrilling victory on away goals.

The Greeks had a 1-0 first-leg advantage and extended that when Ivan Marcano powered in a header. A stunning, defence-splitting pass by Taison allowed Cristian Villagra to finally breach their defence and make it 1-1.

Marko Devic missed a penalty for Metalist but then, minutes later, scrambled in their second goal.

Phillip Cocu, the former Netherlands international, took charge of PSV Eindhoven for the first time as they looked to overturn a 4-2 deficit against Valencia.

Adil Rami edged Valencia ahead on the night just after the interval with a flicked header. PSV levelled through Ola Toivonen's effort but the Spanish side cruised through - although they lost Rami to a red card for an off-the-ball altercation with Toivonen late on.

Hannover had drawn 2-2 at Standard Liege in the first leg, but the German side recorded an emphatic 4-0 success on home soil.

They were 2-0 ahead by half-time as Mohammed Abdellaoue pounced after Sinan Bolat failed to hold on to a cross, then Antonio Kanu scored an own goal as he turned Sergio Pinto's cross into his net.

Liege threatened, hitting the post through a Jelle Van Damme header, but they were 3-0 behind when Kanu scored another own goal, deflecting in Didier Konan Ya's effort. Pinto added a late fourth with a neat finish.

Atletico Madrid, with a 3-1 advantage from the first leg against Besiktas, went 1-0 up early on in Turkey as Adrian Lopez finished and Falcao's close-range header added further gloss to the scoreline.

Eduardo Salvio fired in a late goal to make it 3-0 on the night and 6-1 over the two legs.