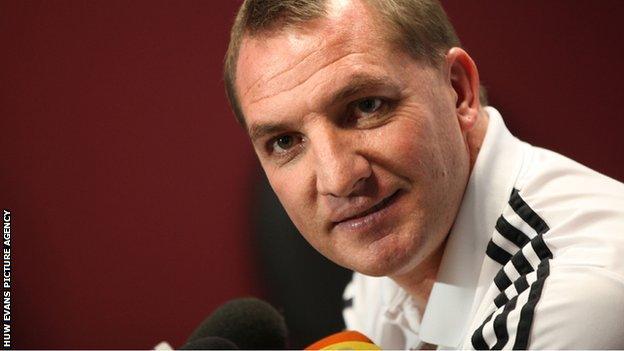 Swansea City manager Brendan Rodgers says he is not in favour of playing in the Welsh Cup if it means withdrawing from the FA Cup and League Cup.

Uefa is considering a request from the Football Association of Wales to allow exiled clubs to represent Wales in European competitions.

Qualification would be via the Welsh Cup but any side entering would not be able to enter English competitions.

While Rodgers believes it would be better for Swansea to remain in the FA Cup and Football League Cup, he stressed that was purely his personal preference.

"It would be a club decision of course, it would be something we'd all have to sit down once all the correspondence was out there," Rodgers added.

"We haven't had anything from the FAW on that, as of yet.

"But certainly for myself, as a football team and a football club you want to be in the most competitive competitions. That's the be-all and end-all of it.

Welsh clubs playing in the English league pyramid - Cardiff City, Swansea City, Wrexham, Newport County, Colwyn Bay and Merthyr Tydfil - were barred by the FAW from entering the Welsh Cup 17 years ago after pressure from Uefa.

But the FAW invited the six Welsh clubs playing in the English competiiton to participate in this season's Welsh Cup.

Regardless of which knock-out competitions Swansea will contest in future, the Premier League remains their chief concern.

Last weekend's prestigious win over league leaders Manchester City at the Liberty Stadium moved Swansea ever closer to survival and gives them a 14-point cushion over the drop zone.

While their Premier League status is almost certainly guaranteed for a second season, Rodgers insists there will be no complacency heading into this weekend's clash with Fulham.

"We have not set any targets," he said. "The aim does not change and that was to make sure we stay in the league.

"It was well documented that we were one of the favourites with nearly everyone to go down, so we're not going to get too carried away.

"We've still got a lot of work to do, there are 10 games left so there are 30 points up for grabs.

"We just want to go into the next game and look to put on another very good performance.

"It would be an incredible achievement for the players in their first season at this level.

"It is an incredibly tough league and the clubs that surround us are absolutely massive at this level.

"They are clubs that have been around it for many years but, like I say, we just want to finish it the very best that we can and let's see where that takes us."