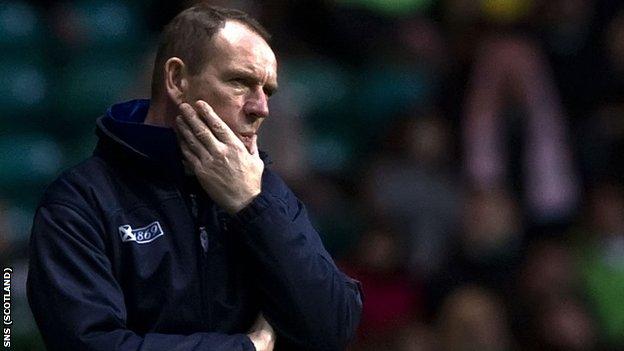 Kilmarnock boss Kenny Shiels believes Celtic deserve to win a domestic Treble but will be doing everything he can to prevent it from happening.

As the teams prepare for Sunday's League Cup final, Shiels told BBC Scotland: "Celtic are so much ahead of everybody else.

"Winning is a habit for Celtic but we have to believe in ourselves."

Celtic, who enjoy an enormous lead in the Scottish Premier League and are in the last four of the Scottish Cup, last performed a clean sweep of honours in 2001, beating Kilmarnock in the League Cup final.

We have intelligent footballers and we play an intelligent game. We can hurt even the best teams

Shiels admires the way Celtic have played this season but hopes his side can rise to the occasion, with Killie having reached this stage of the tournament five times without success.

"As much as I want to win on Sunday, Celtic deserve to win the Treble," he told BBC Radio Scotland's Sportsound.

"As a team, Celtic have proved that they are better. They have that momentum, that impetus and confidence.

"But we have to look at how we can play and how we can affect the game.

"If you dwell on the talent Celtic have too much, the players will get nervous and think 'we've got no chance here'.

"Even though Celtic are massive favourites, if we get our passing game going then we have an opportunity.

"We have intelligent footballers and we play an intelligent game. We can hurt even the best teams.

"We haven't got any stars. They are all cogs in a wheel.

"Celtic have far greater resources but Neil Lennon can only pick eleven players.

"We're a small club and I want the boys to remain humble and respect the spirit we can garner from the community of Kilmarnock. I want to take that into our attitude and prepare our game accordingly."

Kilmarnock will be without skipper Manuel Pascali, who broke his leg last month, while top-scorer Paul Heffernan is a doubt with a groin problem.

"We lost our inspirational captain, so we've been looking at ways of bringing the players together; getting them to understand the importance of chemistry to the team," explained Shiels.

"Celtic weren't too clever when they lost their captain and as soon as Scott Brown came back he provided a massive boost. He's a player that drives the rest on by his actions and commitment.

"Our captain wears his heart on his sleeve, in the dressing room and around the training ground. We miss that."

While hoping his side can impose themselves on Celtic at Hampden, Shiels will warn his men to be wary of giving away free kicks and corners.

"Celtic are very dangerous at set-pieces - that's where a lot of their goals come from - and they have the type of players who pull free kicks," he added.

"James Forrest is an exciting young player but one thing we won't do is get physical with him because that detracts from the game.

"We'll need to get tight but they have more than one threat. If we focus our attention on Forrest, (Gary) Hooper, (Anthony) Stokes or (Georgios) Samaras can hurt us."