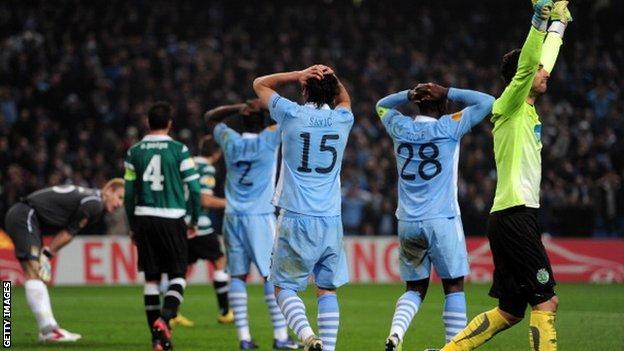 Three goals in 22 second-half minutes saw Roberto Mancini's side come from 2-0 behind on the night to win 3-2.

But they went out on away goals after losing the first leg 1-0, and now have to win the Premier League to avoid a trophy-less season.

"I'm disappointed because I might have made mistakes, and I'm sorry to the supporters," said City manager Mancini.

"The players did everything, and fought on the pitch.

"When a manager doesn't prepare well for the game, this happens. When I lose a game I think about why I lost and think about where I made mistakes."

The Portuguese club went ahead on the night through Matias Fernandez before Ricky van Wolfswinkel doubled the score.

Sergio Aguero scored twice while Mario Balotelli netted a penalty before keeper Joe Hart, who had advanced up field, was denied the most dramatic of goals by his opposite number Rui Patricio with virtually the last touch of the game.

Had that gone in, City would have advanced to the last eight but Mancini refused to blame his players for the lacklustre opening 45-minute display that led to their exit.

At the start the shape was wrong, the tactics were wrong and, for the first two-thirds of the game, they were poor. The worst thing is that you could see from the last 30 minutes how much better City were than Sporting. If they had played anything like that for the full 180 minutes of the tie, they would have gone through comfortably

Instead the Italian blamed himself - despite admitting his displeasure at Balotelli for needlessly conceding the free-kick from which Fernandez scored.

"I think the first half was very strange," he added.

"We could have scored the fourth after scoring three.

"I was disappointed [with Balotelli] after conceding the free-kick, but sometimes it is my fault as the manager, not the player's fault."

Sporting coach Ricardo Sa Pinto said he was 'proud' of his players.

"We knew Manchester City were a big team and for that I am really pleased to get through," said Sa Pinto.

"It is great for the image of Sporting to knock out a team like Manchester City, who are one of the best teams in the world."

City, one point behind Premier League leaders Manchester United with 10 games to play, are next in action at home to Chelsea on 21 March.

It is a match City dare not lose particularly as United, who are away to struggling Wolves on 18 March, could open up a four-point cushion at the summit before Chelsea travel to Manchester.