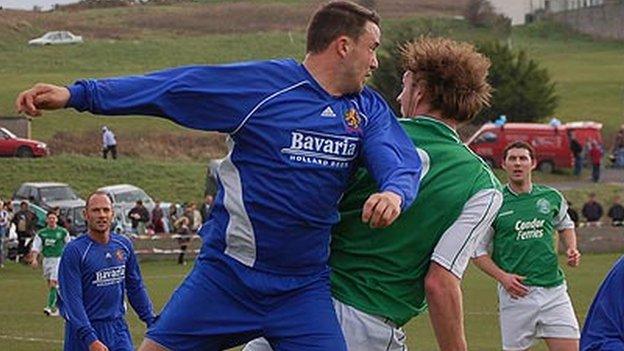 Guernsey are through to May's Muratti final against Jersey after a 7-0 win over Alderney in the semi-final.

Sam Cochrane made it four at half-time and Lee McCormack went close for Alderney before Allen added a penalty.

Substitute Nigel Hutton came on and grabbed two goals to complete the rout and send Guernsey through.

They will now travel to holders Jersey on 7 May for the end-of-season showdown at Springfield Stadium.

"I'm very much looking forward to it. It's a massive sporting occasion for everyone in the Channel Islands," said Guernsey boss Kevin Graham.

"I can't wait to get over there and we're going to work hard between now and then. We're going to do Guernsey proud, I'm certain of it."

Alderney are without a goal since 2006 in the Muratti.

"I think it was always going to be tough," Alderney manager Alan Adamson told BBC Sport.

"They dominated the game. I still think the score probably flattered them a little bit and we conceded a few goals that we'll be disappointed with."