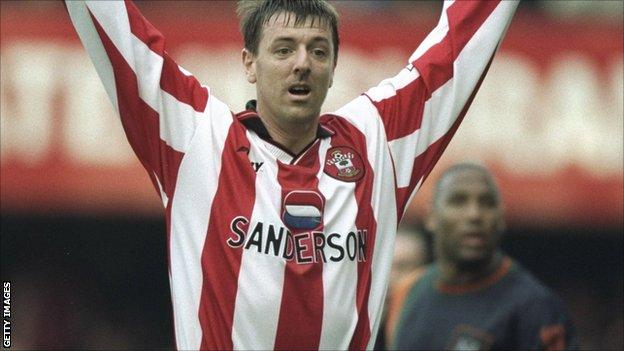 Le Tissier, 43, wants Pompey can survive so that the rivalry between the two clubs can continue.

"It's sad to see, to be honest with you," Le Tissier told BBC Radio Solent's Julian Clegg breakfast show.

"Nobody wants to see clubs go out of business. I know they are our fiercest rivals but I want them to survive."

Le Tissier played 443 times for the Saints, his only club, scoring 162 goals. He is considered one of their greatest ever players.

The former England midfielder knows what Pompey fans are going through, with Southampton also having experienced financial difficulty in recent years.

Portsmouth are currently in administration and in serious danger of being liquidated.

"I want them to still be there so we can beat them whenever we play them next," added Le Tissier.

"There is no way I would like to see Portsmouth go out of business and I am sure there were a lot of Pompey fans who felt them same about us when we were in trouble.

"They still wanted the rivalry, we've been where they've been and it's not a nice place. No football fan wants to see what they are going through."

Meanwhile, Portsmouth boss Michael Appleton says the outcome of the next two home games against Bristol City and Birmingham will affect the club's transfer decisions next week.

Two victories would give Pompey a fighting chance of survival but a couple of defeats would almost certainly condemn the club to relegation.

Appleton says this could help decide whether or not players are sold ahead of the loan window closing next Thursday with the club planning for life in League One.

The club have already sent Hayden Mullins, Liam Lawrence and Erik Huseklepp out on loan and more could follow before Thursday if Pompey lose their next two games as they look to slash their wage bill.

"We are not stupid, we know if we lose the games it is going to be very difficult to stay up," Appleton told BBC Radio Solent.

"But if we do win the games there is an opportunity to stay up bearing in mind we still have to play Doncaster, Coventry and Forest around us.

"I think that what happens on the pitch on Saturday and Tuesday will dictate what happened on Wednesday and Thursday."

And Pompey midfielder David Norris has admitted the uncertainty around the club is having an effect on the players saying it is difficult for them knowing they could be sold or sent out on loan at any moment.

Mullins' departure to Reading on Thursday was the latest big-name departure from Fratton Park.

"You prepare yourself mentally, but is is unsettling seeing players leave and knowing you could have to leave yourself.

"You could come in to work and be told you have to leave. That would be a tough situation and luckily it hasn't happened to me yet."