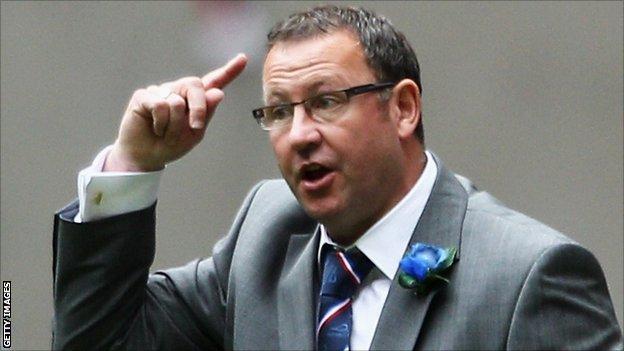 Carlisle United manager Greg Abbott has said his side have been a "nuisance" to League One this season and wants the club to stake their promotion claims.

The Cumbrians, buoyed by a 14-match unbeaten home run, are a point behind Notts County in the final play-off place with two games in hand.

"We're a nuisance to everybody at the minute," Abbott told BBC Radio Cumbria.

"Looking at the table now, we're in there with a fighting chance, and everyone has got to give it a push."

Abbott added: "The message is 'let's keep believing and keep going for it while there's a genuine chance, and we hope we can grab it'."

Former Middlesbrough striker Lee Miller has been key to the club's push for the play-offs, scoring 12 goals in 26 league games following his move from the Riverside in August last year.

The Scotland international, 28, has formed a useful partnership with 11-goal forward Francois Zoko and compatriot Jon-Paul McGovern in a forward trio at Brunton Park.

However he was limited to just 13 appearances in 18 months at Boro, and had loan spells at Notts County and Scunthorpe before switching to Carlisle.

"We know we needed that type of player and getting that type isn't easy," Abbott continued.

"Lee knows he's a decent player, but he's now a happy player and is a comfortable player in the surroundings he's in.

"He's playing regularly, he's well thought of, the staff like him, the fans like him, the other players like him and it's a better environment to play football.

"We're seeing the best of him, that ability has always been in there, it's grabbing it out and finding the right club and people around him and we've done that with Lee.

The United boss is also waiting on the future of Jordan Cook, who has been on loan from Sunderland since mid-January but has now returned to Wearside.

"It's not dead, we need to speak to Jordan on a one-to-one, and I'm going to do that to find out his feelings," he added.

"I've spoken to Sunderland and I know their feelings, so by Monday there should be a resolution to that one."