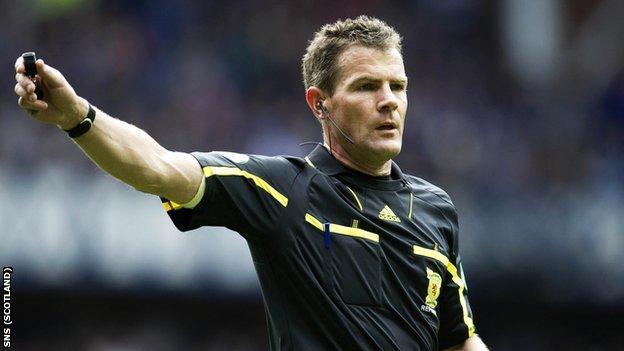 Disillusioned Steve Conroy has quit as a top-class referee in Scotland.

The 45-year-old notified the Scottish Football Association of his decision to resign after being overlooked for a top-flight match for three months.

Conroy refused to comment on his decision but it is believed he is considering legal action against the SFA's referee department.

His last Scottish Premier League match was the controversial Rangers-Dunfermline game on 3 December.

This was the game in which Conroy, a category one official for 12 years, awarded Rangers a spot-kick after Sone Aluko went down inside the box under a challenge from Martin Hardie.

"The three gentlemen on the panel have effectively called my player a cheat and a liar, neither of which he is," he said.

"It's an absolutely incredible decision, given that the referee is literally five yards from the incident.

"The panel agreed there was contact, so for them to uphold the decision and go against their own referee, who had a particularly good game, is ridiculous."

That Ibrox fixture was Conroy's eighth and last top-flight fixture this season as he has since been sent to the lower leagues to officiate.

The referee supervisor at Ibrox that day was Donald McVicar, the former SFA head of referees, who complimented Conroy's performance immediately after the game.

Conroy, a doctor by profession, decided to end his career when he was allocated Saturday's Third Division fixture between Berwick Rangers and Queen's Park.

Only two years ago he was given the responsibility of refereeing the New Year Old Firm derby.

He was regularly seen as the man in the middle of other high-profile matches, including the Edinburgh derby between Hearts and Hibernian.

Conroy, who became a referee in 1993 and achieved category one status in 2000, is highly respected by managers and players in the Scottish game, particularly for his communication with players.

He is regularly at the lower end of the red and yellow card table.

He has taken charge of close to 300 senior matches, including almost 100 in the SPL, as a category one referee.