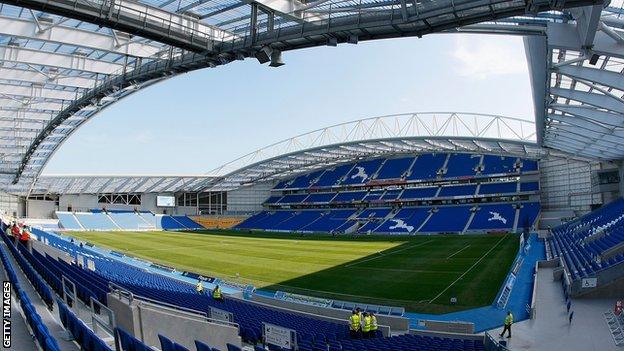 Martin Perry has stepped down as chief executive of Brighton & Hove Albion, while managing director Ken Brown has left the club.

The duo helped oversee the club's move to the Amex Stadium.

Perry will remain as an executive director but will retire in 2014 once the Seagulls move into their proposed new training complex in West Sussex.

Brighton will recruit a new CEO, with long-serving director Derek Chapman taking on the role in the interim.

Perry told BBC Sussex: "In July I will be 65 so by the time the extra seats and the training ground are complete, I will be 67.

"Those jobs will take up all my time, so the right thing to do is make way for somebody to take the club forward and set itself up for whatever the future holds. The business is four times as big as it was this time last year.

"There will be no vacuum at all. Derek Chapman is a long-serving director of the club, he knows the club inside out. I'm still here, there is complete continuity through this process."

A statement on the club's website read: "The club's board of directors would like to thank Ken for all his work and commitment over the last four years and wish him every success going forward.

"Martin's personal contribution to the club has been enormous over the last 15 years, and we would not be where we are without his efforts."

David Jones will join the board of the Championship club as finance director.