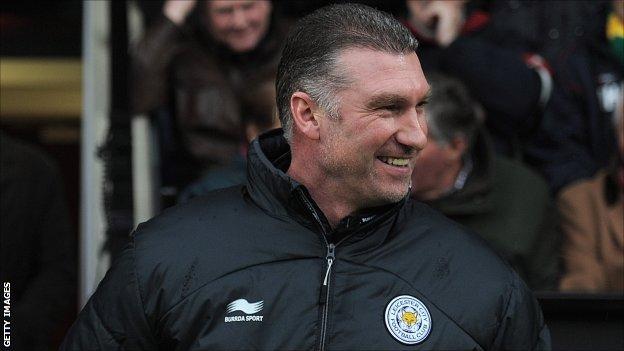 Leicester City manager Nigel Pearson says he believes his side are capable of causing an FA Cup upset against Chelsea this weekend.

The Foxes travel to Stamford Bridge on Sunday for their quarter-final tie.

Pearson told BBC Radio Leicester: "Due to the nature of these competitions, anything can happen on the day.

"We have to go into the game with a very positive mindset and make life difficult for them, so of course I believe we can move forward."

BBC Radio Leicester have spearheaded a social media campaign throughout the club's FA Cup run and Foxes supporters will be wearing t-shirts with the message '#I believe'.

Pearson is no stranger to Cup runs and reached the FA Cup final with Middlesbrough in 1997, but lost 2-0 to Chelsea.

That Blues side contained current caretaker manager Roberto di Matteo, who scored the opening goal which sailed over Pearson's head after only 42 seconds.

"I have been very fortunate to be involved in some very successful Cup runs in my career as a player," continued Pearson.

"We have got to be at our best, there is no doubt about that. You have to respect whoever you are playing.

"The key factor for us is that our players have to go out there and see it as an opportunity to play against a side who are, and have been for the last few years, one of the most successful teams in the country.

"We want to go and give a good account of ourselves and cause some problems. Clearly we have to catch them on a not so good day and we've to be at our best.

"I still think it is a fabulous opportunity for the players to show what they can do and we've earned our place in the quarter-finals."