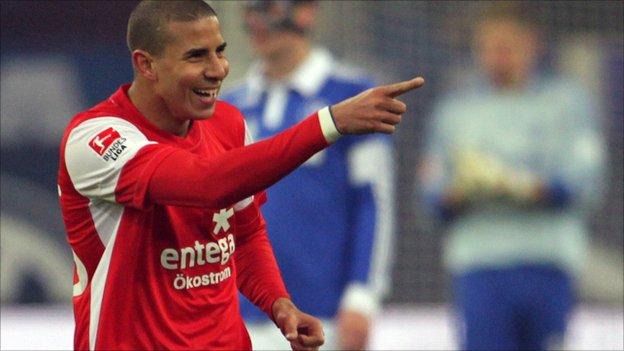 Mainz 05 coach Thomas Tuchel says he is keen to extend the stay of Egyptian striker Mohamed Zidan beyond the season.

The 30-year-old is in his third spell with the club, having signed from Bundesliga champions Borussia Dortmund in January.

But after six goals from his opening six games, Tuchel is keen to take up the option to sign the Egyptian.

"It is clear we want him to stay," Tuchel told BBC Sport.

"As far as I know, we have the possibility to extend the contract for another two years and we alone have that option."

"If it was only my decision as coach, it is crystal clear we would continue the contract - not only because of the goals he has scored but also because of the way he has improved the whole level of the whole team."

Zidan first represented his current club in 2006, when on loan from Werder Bremen, whom he then left in 2007 as he signed for Mainz on a permanent basis.

Moves to Hamburg and Dortmund - where he won a league winner's medal last season - followed, before a lack of playing time prompted Zidan to sign in January.

The 2008 and 2010 Africa Cup of Nations winner has scored in all six matches he has played since, a run that includes goals against derby rivals Kaiserslautern and former club Dortmund.

Having become the first player in Bundesliga history to score six goals in as many games for a new club after the transfer window, Zidan can improve his record away to Augsburg on Saturday.

"I hope the run continues and if it does, there is a high possibility we will get some points there - it's a difficult game," said Tuchel, who used to work at Augsburg.

A win for 11th-place Mainz on Saturday could lift them into the top half of the 20-team Bundesliga.

Last week, Zidan was fined by the German Football Federation after he swore at rival fans during a league match in February.

The Egyptian has been based in Germany since joining Werder Bremen in 2005.