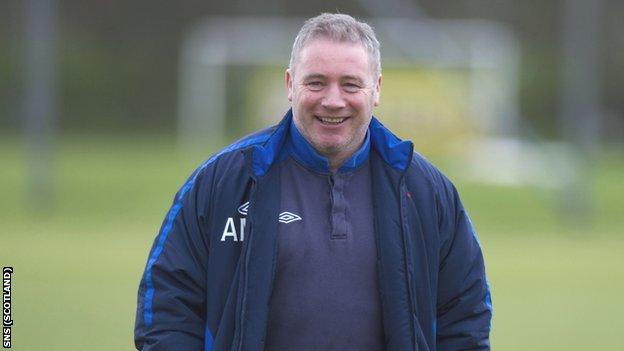 Rangers manager Ally McCoist has been boosted by news of interest in the club ahead of the Friday afternoon deadline for first indicative takeover bids.

"I spoke to David Whitehouse from Duff & Phelps this morning," said McCoist.

"He was very positive there would be a number of bids in before close of play today, which is very encouraging."

McCoist, who has spoken to Scots-born Kennedy, would not be drawn on which bid he would like to see accepted.

"The best thing for the club is to look forward and get through this," he said.

"There won't be any benefit in me passing comment just now.

"Some of my younger players have been absolutely outstanding. They have really given me some strength

"The meeting with Brian was extremely positive about the club and what his involvement would be in taking the club forward.

"It is not for me to say what the best option is for the club. However, I'd be hoping to speak to every potential purchaser.

"It would be unfair to state my preference. It's my job to remain neutral through this."

McCoist takes his team to Tannadice on Saturday lunchtime to face Dundee United after a two-week spell focused on cutting players' wages to save £1m in monthly running costs.

Rangers' slide into administration, , incurred a 10-point penalty from the Scottish Premier League.

That may have ended the club's chances of beating Celtic to the title, but the Ibrox side, second in the league, are still 14 points ahead of fourth-placed United.

"All I want is to get some normality," said McCoist. "We haven't had any for a long time.

"We're looking forward to getting back to playing football."

The manager, though, is limited in his options at the back for the Tayside trip, with six defenders absent.

That leaves Andrew Little, Ross Perry and Lee Wallace available to the manager.

"Some of my younger players have been absolutely outstanding," said McCoist.

"They have really given me some strength to move forward."