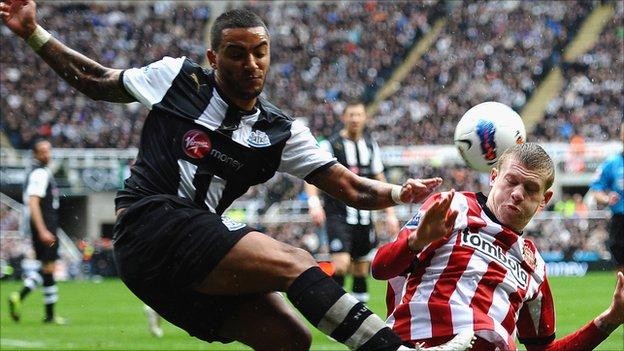 The 25-year-old deleted his Twitter account following comments from fans after the 2-1 defeat by Arsenal on Monday.

"It's not right, you've got to think of the player when doing something like that," Bernard told BBC Newcastle.

"Fans should be encouraging players and supporting the team."

He added: "A lot of people give him grief because he has not signed a contract but on the pitch he has done enough to keep his place in the team."

Salford-born Simpson has been a Premier League ever-present at the club this campaign, and was a member of the side that won the 2009-10 Championship title.

You need to give the player time, he's shown this season he's good enough to play at a club like Newcastle

Meanwhile, Bernard also has sympathy for Italian full-back Davide Santon, who has been substituted at half time in his last two appearances for the Magpies.

The 21-year-old moved to Tyneside from Inter Milan in the August transfer window and despite making 17 appearances this season, is yet to fully convince supporters of his defensive attributes.

It is a situation former Lyon and Rangers defender Bernard is aware of, having come to Newcastle from France as a 19-year-old.

"You need to give the player time, he's shown this season he's good enough to play at a club like Newcastle," Bernard added.

"He's come in to the English game and it is very quick and can be hard to pick it up.

"If you come off at half-time you know there is something wrong but he needs time and is a player for the future.

"The good thing is he is part of a young team and it takes time for players to gel, next season he will become more established and has a bright future."