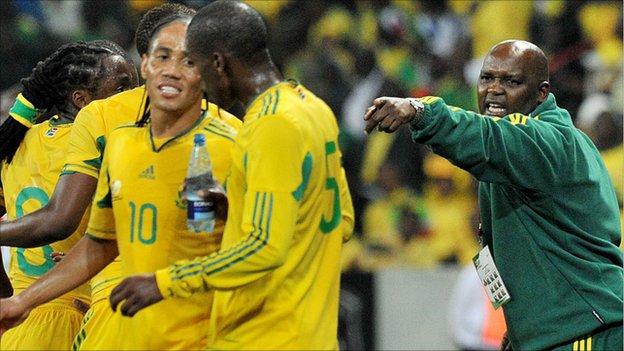 Defender Anele Ngcongca has urged South Africa fans to get behind coach Pitso Mosimane in the build-up to the 2013 Africa Cup of Nations on home soil.

The South African FA (Safa) has told Mosimane he must reach the final after failing to qualify for the 2012 edition in Equatorial Guinea and Gabon.

"The coach is trying to build a team to go to the African Nations Cup and then the World Cup in Brazil," the Bafana Bafana right back, 24, told BBC Sport.

"So everyone has to give him a chance."

Ngcongca has become a permanent fixture at right back after playing against France at the 2010 World Cup and then helping his club Racing Genk win the title in Belgium last year.

And despite the mounting pressure on Mosimane following last month's goalless draw at home to Senegal, the defender believes Bafana Bafana can silence their critics.

"I know that the people at home are disappointed because we haven't been scoring goals but we are trying to look at the positives," he said.

"I think we are lucky to have a coach like Pitso - everyone works hard for him and we went into the match against Senegal knowing we needed to win for the country to get the spirit back.

"Unfortunately we missed some chances to win the game, but afterwards we still felt confident that we are heading in the right direction.

"We have to keep our heads up now and it will come right."

South Africa have not won since August, a run which has seen them score just twice in their last six matches.

This includes the infamous 0-0 draw against Sierra Leone when South African officials mistakenly believed they had made it through to the Nations Cup.

The goal drought has even led to speculation that record goalscorer Benni McCarthy should be recalled after finding the net five times for his club Orlando Pirates.

Leeds United striker Davide Somma has also been unavailable all season due to injury, leading Ngcongca to acknowledge that the 1996 champions rely too much on top scorer Katlego Mphela.

"Everything was going so well for us and then suddenly we stopped scoring goals at a crucial time," he said. "We put a lot of pressure on Katlego but it all starts from our league back home.

"So many times you see that the top scorer is from Zambia or Zimbabwe and it's something Safa needs to do something about so we can develop the next (Siyabonga) Nomvete or McCarthy.

"We really need to develop some more strikers to have a chance of being successful."

After making his Uefa Champions League debut for Genk in a group that included Chelsea, Ngcongca is now hoping for a move to a bigger league at the end of the season.

"I've heard some teams have been following me ever since the last game in the World Cup against France when I got my big chance," he admitted.

"I grabbed it with both hands and I haven't looked back with the national team. But sometimes things don't go as you want and you have to keep pushing hard to achieve your dreams."