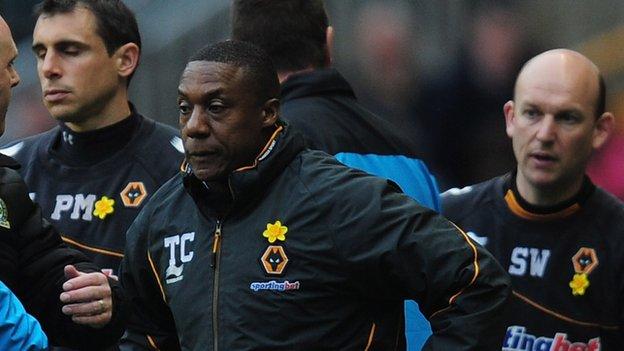 Wolves manager Terry Connor is calling for unity between players and fans after criticising supporters who confronted midfielder Jamie O'Hara.

Players will be warned to avoid leaving Molineux by the main entrance if there is another hostile atmosphere, when they play Manchester United on Sunday.

O'Hara was carrying his baby when he was surrounded by fans after Wolves lost 2-0 to Blackburn.

Connor said: "It is imperative everyone stays together."

There were protests during and after the defeat against Blackburn with club owner Steve Morgan also being targeted.

Wolves are second bottom of the Premier League table, one point from safety.

The Wolves caretaker manager said: "I think, whenever there is a bit of discontent, it is maybe directed at one section or one part of the club.

"It actually involves us all. We are all in it together, all part of it together, so it is disappointing having a go at one part of the structure when it affects us all. It is not nice to see.

"Everyone connected with Wolves must be pulling in the same direction 100% to have any chance of us getting through this situation.

"If we do that, we've got a better chance. We are asking everyone to turn up against the reigning champions and support our team, come what may."

Discussing the O'Hara incident, he added: "I think it really is unacceptable players being abused on the way to their cars.

"But we do have a protocol for the players to leave through different entrances if they need to.

"If you go out through the main entrance, you have to accept there are people out there.

"The players will be advised if anything happens in the same vein this Sunday, that they can leave the building in a more secure manner."