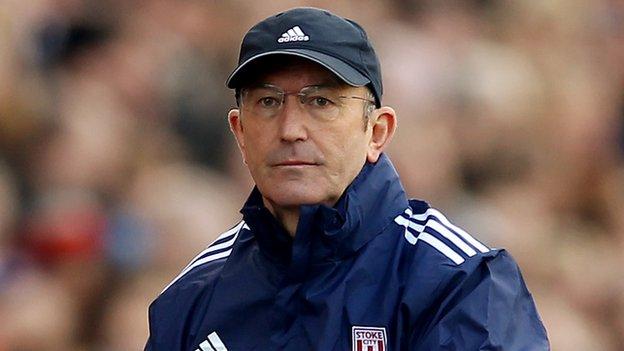 Stoke City can end an unenviable record of not having won at Anfield for more than half a century by beating Liverpool in their FA Cup quarter-final meeting on Sunday.

And manager Tony Pulis, who led Stoke to the final in 2011, believes his team have the will to win.

But they face a tough task: "We know how difficult it's going to be.

"They are the favourites and rightly so. But we'll do our best, as we always do."

If we can just raise the bar a little bit again then, if things go for us, we might get the result everybody in Stoke-on-Trent wants

Stoke defeated Bolton 5-0 in the semi-finals at Wembley last year before losing 1-0 to Manchester City in the final. But to reach the next round they must do what no Stoke side has managed since 1959 and win at Anfield.

Stoke have already met Liverpool three times this season, having won and drawn against them in the Premier League but losing in the Carling Cup.

Pulis said: "It's a very tough game for us. Liverpool are a very good side, especially at home.

"This will be the fourth time we've played them this season and they've always been tight games and good games.

"It gives us heart that we've played them three times and given them a good run for their money on three occasions, and that will be the theme this week.

"If we can just raise the bar a little bit again then, if things go for us, we might get the result everybody in Stoke-on-Trent wants."

Stoke will be without striker Ricardo Fuller, who serves the first game of a three-match ban following his red card at Chelsea. Pulis has no fresh injury worries and will bring in former Liverpool striker Peter Crouch, who was rested at Stamford Bridge.

Pulis said: "His stats have been unbelievable and I wanted him fit for this week, and obviously the Liverpool game is the big game."