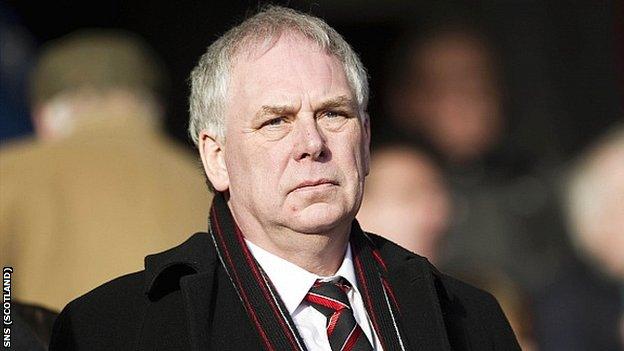 The club sacked Jim McIntyre on Friday and Yorkston says that he has identified who he wants and will hold talks with him over the weekend.

"We know who we want," Yorkston told BBC Scotland.

"There are a number of names that are being banded about that are in employment, so it would be unfair to approach them at the moment."

Yorkston, who ruled out a return to management for director of football Jim Leishman, added: "We're looking to get a temporary candidate in until the end of the season.

"We'll go for an experienced person and then take it from there."

Former Pars boss Jimmy Calderwood and Jim Jefferies, who has vast top flight experience with Hearts and Kilmarnock, both fit the bill but Yorkston would not be drawn on names.

The club sit bottom of the Scottish Premier League - four point adrift of Hibernian, have not won at home all season and have gone eight games without a victory.

However, Yorkston said the move to sack McIntyre was not taken lightly by the board.

"Jim is a great guy and that made the decision all the harder," said Yorkston of the manager who led them to promotion from the First Division last season.

"In the last two seasons we've played some of the best football I've ever watched but we are where we are in the league and it's a results business.

"There have been fans on the internet saying we should have made the decision sooner.

"It's not long, but there is time. There are eight games left and we are four points behind with 24 points left to play for."

Dunfermline face St Mirren and Hearts at home and Dundee United away before the SPL split.