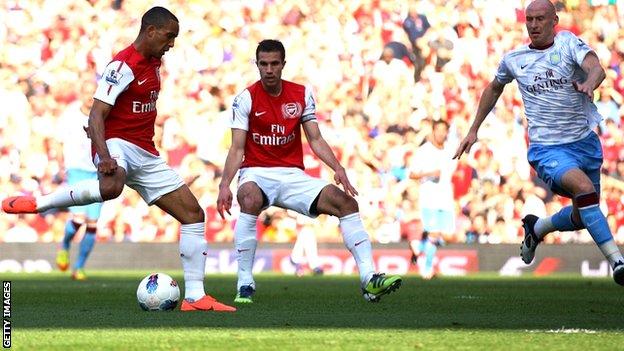 Gibbs exposed some poor defending and goalkeeping from Villa to put the hosts in front with a crisp low finish.

Arsenal were dominating their opponents and doubled the lead when the excellent Walcott collected Alex Song's lofted ball and slotted past Shay Given.

Arteta wrapped up the match in stoppage time with a stunning free-kick.

It was another important result for the Gunners, moving them three points above fourth-placed Tottenham - - and continuing their superb upturn in form.

For much of the season their hopes of a top-four finish looked in serious doubt, but that now looks comfortably within their grasp.

Their day did not start so well as centre-back Laurent Koscielny pulled out of the side after feeling a knee injury during the warm-up.

More trouble loomed when his replacement, Johan Djourou, required lengthy treatment after being hit in the face by Emile Heskey's arm.

But the Swiss recovered and, aside from a Marc Albrighton drive that sailed over shortly after the re-start, Arsenal were in total control.

Villa had no answer to the pace of wingers Walcott and Gervinho, and allowed Arsenal far too much time and space to pick passes to the pair.

There was an early warning when Given parried Walcott's strike after a sharp exchange between Walcott, Bacary Sagna and Robin van Persie.

Villa, who remain three places above the relegation zone, were desperately lacking the defensive leadership of injured captain Richard Dunne - never more so than when Arsenal opened the scoring.

Alan Hutton, Stilyan Petrov and Chris Herd stood still as Gibbs collected Gervinho's pass and fired in an effort that Given should have saved.

Villa had lost only one of their previous eight away games and they briefly threatened when Stephen Ireland broke clear and crossed towards Heskey, only for Vermaelen to intercept.

Arsenal were swiftly back on the offensive and their reward came when Song found Walcott and he stepped inside Cuellar to side-foot home.

Given saved well from a Van Persie header and Arteta's drive, while Warnock brilliantly nodded Van Persie's goalbound shot over the bar.

The second half was more even, with Djourou needing to be alert when Albrighton crossed for Gabriel Agbonlahor, while Song headed over and Tomas Rosicky tested Given from distance.

Both managers used their full quota of substitutes and one of Villa's, Andreas Weimann, benefited from an error by one of Arsenal's, Andre Santos, but dragged wide when clean through.

Arteta then had the final word, producing a magnificent set-piece with virtually the final kick.

"We had a great first half. We knew we'd given a lot at Everton on Wednesday and the start was very important for us today.

"In the second half we dropped a bit our pace and level but what we've done this week is outstanding, given the quality of the game at Everton and today.

"They were three great goals. Villa defended well but we created chances, didn't concede and our momentum keeps going."

"At the moment we are in a strong position and it will be down to our results and how we play until the end of the season."

"You can come here and lose but we're disappointed in the manner we lost the first two goals - they were definitely preventable.

"We got in about them in the second half and Andy [Weimann] had a fine chance, but we didn't get that goal and Arteta wrapped it up.

"It's Arsenal we were playing, don't forget - one of the elite clubs.

"We did lay plans to try and win the game and definitely had the power and team to get goals, but the early goals nailed us."