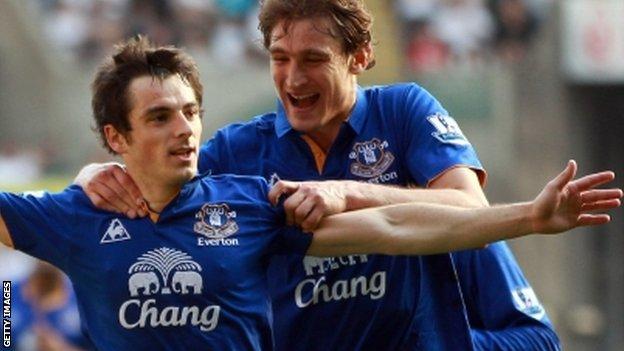 A sublime Leighton Baines free-kick set Everton on their way to a first away win in six attempts and ended Swansea's run of three consecutive victories.

Swansea dominated the first half but Baines struck after the break, finding the top corner from 25 yards.

Influential midfielder Steven Pienaar almost added a third as the home side capitulated after the break.

The result extended Everton's unbeaten record against the Swans to 15 games, and was a tactical victory for manager David Moyes.

He set out his team to pressure the home side high up the pitch, successfully cutting off the hosts' usual flow of possession from defence into midfield.

Everton, who join Manchester United and Norwich in winning at the Liberty Stadium this season, were effective rather than spectacular in the first half.

They had arrived with one eye on Tuesday's FA Cup replay against Sunderland, Moyes resting Johnny Heitinga, Marouane Fellaini and Roysten Drenthe.

Phil Jagielka was among those restored to the side and the centre-back proved a one-man wall in the first half as he repelled Swansea's best efforts.

His first telling intervention came on 24 minutes when he was at full stretch to cut out Gylfi Sigurdsson's low cross as Danny Graham waited for a tap-in.

He then slid in to block to Sigurdsson's shot before clearing Angel Rangel's dangerous delivery across the face of goal.

A wayward Jelavic header was Everton's only effort of note in the opening 45 minutes, but they gradually began to take control as the break approached.

The striker wasted a glorious opportunity early in the second half when he sliced high and wide after the ball fell to his feet inside the penalty area.

And then a 20-yard stinger from Darron Gibson brought Michel Vorm into action for the first time in the Swansea goal.

But the Dutch keeper had no chance just before the hour as Baines found the top corner to put the visitors ahead.

The left-back won the free-kick himself as he tempted Ashley Williams into a rash challenge 25 yards from goal in a central position. Vorm knew what was coming but Baines's execution was perfect.

Brendan Rodgers made a triple substitution as his side ran out of ideas, but a second Everton goal arrived within five minutes of the change.

Fellaini, on for Tim Cahill, outmuscled Williams near the by-line and his precise pass gave Jelavic a simple tap-in from inside the six-yard box.

Swansea were fortunate not concede again as Pienaar, whose influence grew as the game progressed, twice set up substitute Denis Stracqualursi.