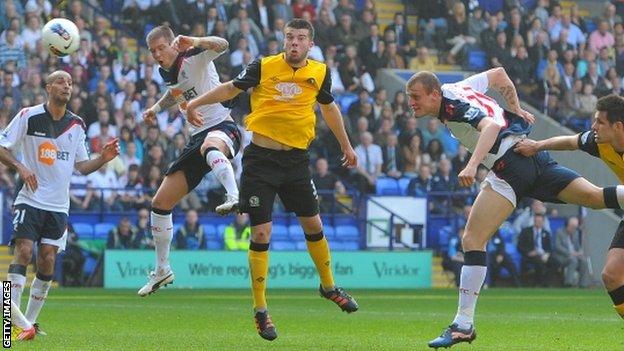 As midfielder Muamba continues his recovery after collapsing during the abandoned FA Cup quarter-final at Tottenham, Bolton were back in Premier League business with victory courtesy of defender David Wheater's two first-half headers.

There were emotional scenes before kick-off as - and once the action started Bolton delivered the result the club craved in their fight to retain Premier League status.

Wheater headed home twice in seven minutes to give Bolton control before the interval, both goals celebrated by the chanting of Muamba's name from the home support.

Steven Nzonzi pulled a goal back for Blackburn early in the second half but, despite some anxious moments, Bolton held on to move out of the bottom three and to within two points of Steve Kean's side.

At the final whistle, Muamba's name rang around The Reebok once more as manager Owen Coyle joined his players in a huddle at the conclusion of a traumatic week for the club.

In the spring sunshine, supporters had begun arriving hours before kick-off to place items at the area of the stadium designated as a monument to the popular Muamba.

Bolton's players emerged for the warm-up in white shirts bearing Muamba's number "6" - while the green bibs worn by the substitutes carried a similar tribute.

The big screens showed a video montage of the good wishes sent to Muamba from around the football world, bringing prolonged applause from both sets of supporters.

And when the teams came out, a giant mosaic was revealed with the slogan "Muamba 6" as cards were held aloft along the entire length of one side of the stadium.

A period of applause was held prior to kick-off, before - perhaps understandably in the circumstances - the match itself got off to a slow start.

The visitors felt, with some justification, that they had claims for a penalty when Junior Hoilett tumbled under the outstretched leg of Gretar Steinsson but referee Andre Marriner was not interested.

Their frustration increased when Bolton took the lead after 28 minutes as Martin Petrov's cross took a touch off a defender and Wheater arrived to head past Paul Robinson.

Yakubu, always a danger in the box, was inches away from equalising with a firm downward header from Marcus Olsson's cross before Wheater bagged an unlikely double to put the Trotters further in front.

Rovers were once again guilty of dreadful marking, Wheater left unattended as he applied another firm header to Ryo Miyaichi's corner.

The hosts were soon on the attack again after the break, David Ngog just off target from Petrov's cross - but Blackburn were back in the game after 56 minutes when Nzonzi was allowed too much time and space to head Morten Gamst Pedersen's long throw past Adam Bogdan.

In what had become a lively affair - and with the visitors now sensing they could get a point - Bolton's Mark Davies should have done much better than head wide after escaping the attentions of the visitors' defence.

Yakubu was then narrowly off target with 10 minutes left as he attempted to flick in Hoilett's cross at the near post, another sign of Blackburn's growing belief.

This was Bolton's day, however, and scenes of relief and celebration - as well as more expressions of support for Muamba - accompanied the final whistle.