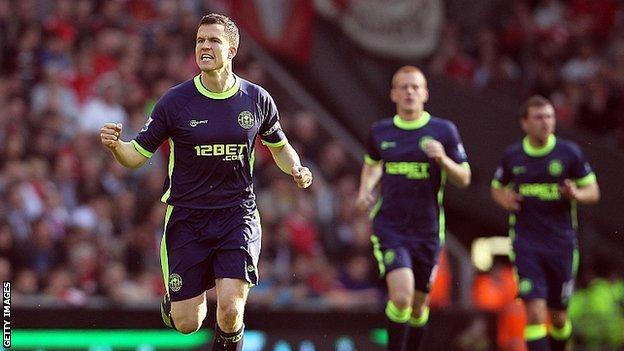 Wigan gave their survival hopes a massive boost with a first-ever win at Anfield as Liverpool's desperate run of league form continued.

Shaun Maloney fired the visitors ahead from the spot but his goal was cancelled out by Luis Suarez, finishing crisply from Steven Gerrard's pass.

The Uruguayan had a goal disallowed for handball before Gary Caldwell stunned the home crowd with a neat finish.

The defeat was Liverpool's fifth in their last six Premier League games.

The scoreline, and alarmingly flat performance, will increase the pressure on manager Kenny Dalglish, who has constantly insisted that the club are making progress this season.

For Wigan and their manager Roberto Martinez, the victory was crucial to their chances of beating the drop, taking them level on points with 18th-placed QPR, within one point of safety.

The Latics refused to be overawed by their more celebrated opponents and were good value for just their second win in 14 league games.

After a cagey start, Wigan fashioned the first clear opening as Victor Moses cut in sharply from the right and worked space for a shot, but his effort was blocked by Martin Skrtel.

Liverpool dominated possession in the early stages but lacked any conviction or subtlety in the final third, their growing frustration encapsulated in an angry exchange between Luis Suarez and Stewart Downing.

After 26 minutes, the home side finally worked a chance as a Suarez flick put Downing into space inside the box, but his low strike fizzed past the post.

Moments later, Wigan were awarded a penalty as Liverpool failed to clear a free-kick and, when the ball was returned to the box, Skrtel was penalised for a high challenge on Moses.

After a delay for Moses to receive treatment, Maloney kept his composure to expertly tuck home his first goal for the club.

The goal sparked an improvement in Liverpool's play and Wigan goalkeeper Ali Al Habsi was the busiest man on the pitch for the remainder of the half.

First he dived to his left to save a curling Suarez shot from outside the area, and then he reacted sharply to keep out a deflected Gerrard drive.

Dalglish brought on Andy Carroll at half-time and the Reds were soon on level terms as Skrtel and Suarez worked some space on the right for Gerrard, who squared for the Uruguayan to finish neatly.

But the goal was ruled out after referee Lee Mason consulted his assistant, replays appearing to confirm that the striker - who was booked - had used his hand to turn the ball in.

Having believed momentarily that they were ahead, Liverpool were soon behind as Wigan conjured a goal out of nothing.

James McCarthy's drive deflected off Jamie Carragher into the path of Caldwell, who turned inside Carroll and lashed past Pepe Reina.

A near-silent Anfield looked on in disbelief as a rag-tag Liverpool struggled to mount any sort of fightback.

But Liverpool's main tactic was to hoist long balls towards Carroll, an ineffective ploy until the giant striker's flick-on found Suarez, whose low drive was easily kept out by Al Habsi at his near post.