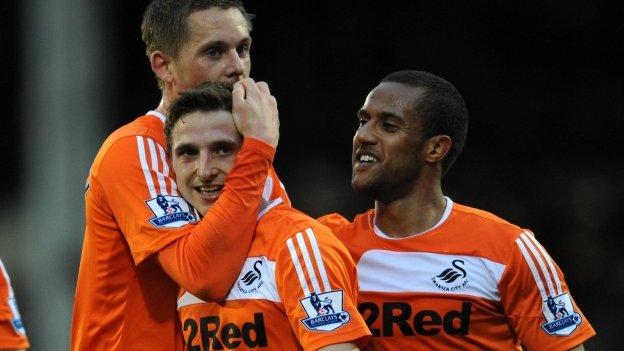 Brendan Rodgers says Swansea City are in "dreamland" after a convincing win at Fulham lifted them to eighth place in the Premier League.

Gylfi Sigurdsson scored in each half before Joe Allen struck to give the Swans three straight wins for the first time this season.

"It's dreamland for where we are at in terms of our resources," Rodgers said.

"What we do have is top players - players who come in every day to work. There are no big-time egos around."

And he added: "They are players who have an inherent belief in our system and style of play.

"They defend the principles of how we play, miraculously at times, and they are rewarded with performances like today."

Swansea's victory came six days after they stunned then leaders Manchester City at home, and takes them 17 points clear of the relegation zone with nine games remaining - though Rodgers refused to acknowledge outright that his side were safe.

He added: "I felt it was our biggest game because last week we played well and won against a great team, but then comes a game raiser and we were phenomenal.

"The passing and tempo was fantastic, but defensive play such as pressing and blocking was tremendous.

"We're not worried about points, we just want to finish as high as we can."

Midfielder Sigurdsson laid the foundations for victory at Craven Cottage as he took his goal tally to five in just nine Premier League appearances since joining on loan from German side Hoffenheim in January.

"We are playing with real confidence and got a win against a top team last week," said the 22-year-old, who previously worked with Rodgers during a spell at Reading.

"The team have been setting me up fantastically for my goals. It's been easy for me to come in and gel with the players.

"The manager has given me the confidence to play and for us to enjoy it."

Fulham manager Martin Jol said his side's poor passing contributed to their defeat but had no complaints over the result.

"We were too sloppy in possession and that is exactly what they want," he said.

"They are a good footballing team. You have to be mobile and aggressive. It was a blow when they got the early goal and we tried to repair the damage in the second half by pushing up.

"They were the better team and we lost our shape.

"All credit to them. We were above them in the league but today we gave them all the tools to do what they wanted.

"We want to be as high as possible but we have to pick ourselves up and try to come up with a response against Manchester United."