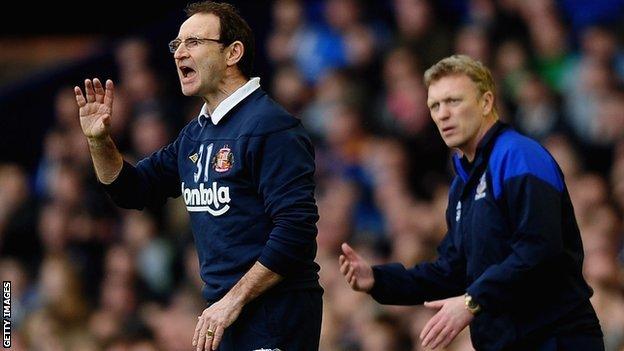 Sunderland manager Martin O'Neill said his side were indebted to goalkeeper Simon Mignolet for earning an FA Cup fifth-round replay against Everton.

The Belgian was outstanding in the 1-1 draw at Goodison Park, making a brilliant double save late on to deny John Heitinga and Nikica Jelavic.

"The first one was world class and then he made a magnificent effort to recover and save from Jelavic."

Sunderland have visited Everton on nine occasions in the FA Cup and lost seven. Their only success there was in 1938.

O'Neill was reminded of Jim Montgomery's famous saves in Sunderland's last FA Cup final triumph - against Leeds United in 1973 - but warned there was still work to do at the Stadium of Light before they can contemplate a semi-final appearance at Wembley.

He said: "There have been a couple of references to Jim's save after the game. He made two saves in quick succession and Sunderland went on to win the FA Cup but we are a million miles away from that."

Sunderland will have the suspended Lee Cattermole and Stephane Sessegnon back for the replay and O'Neill said: "There is an advantage in terms of us being at home but I would say that is the only advantage.

"Everton are very strong, getting players back and are very capable of winning but from our point of view we will have a couple of players back ourselves."

Toffees manager David Moyes, who chose not to attend the post-match written media press conference, was furious in his technical area after referee Andre Marriner refused to award a penalty after Royston Drenthe was brought down by Craig Gardner.

Everton assistant manager Steve Round said: "It was a clear foul. Maybe it was too early for the referee but he was right there on the spot and we don't know why he didn't give it.

"I thought Roy [Drenthe] didn't get much of the rub of the green. I thought he was fouled on numerous occasions.

"Whether they think he is diving or not, obviously he isn't because he is getting fouled. He is so small, he hits the deck. We are a little disappointed he didn't get more fouls than we expected."

O'Neill said: "That [penalty incident] has been mentioned but I haven't seen it back, although I thought there was a foul on Fraizer Campbell in the build-up to Everton's equaliser."