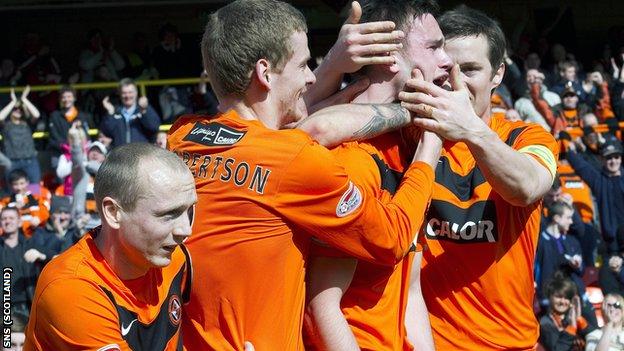 Manager Peter Houston was thrilled to beat Rangers at Tanndice, even if his Dundee United players were not entirely satisfied with the 2-1 win.

"It's a massive three points no matter what Rangers side you're facing," Houston said after stretching United's league run to four straight wins.

"Our guys came in shaking their heads in disappointment.

"But it's games like this when you don't play well and get three points that make the difference."

A scrappy first half suddenly burst into life when Keith Watson blazed home an excellent strike from the edge of the penalty box.

And an under-strength Rangers side fell further behind when Jon Daly tapped in from close range early in the second half.

The visitors hit back when a Sone Aluko shot deflected in off John Rankin and United spent the remainder of the game defending deep in their own half to protect their lead.

"We played better in the first half against Celtic last week and got beaten," said Houston.

"The difference is we go one up this time.

"We started the second half on fire and got the second goal through a great cross from Gary Mackay-Stevens to Jon Daly.

"But, after that, we put ourselves under pressure with poor decision making.

"We got deeper and deeper, no matter how many times I shouted to get them up the park."

United have now gone seven games unbeaten in the Scottish Premier League and sit fourth in the table, 11 points behind Motherwell and Rangers.

And Houston was full of praise for his squad's resilience in the face of sustained late pressure from Rangers.

"This group of players work very hard and their attitude is spot on," enthused Houston.

"We're scoring goals and keeping the door locked at the back."