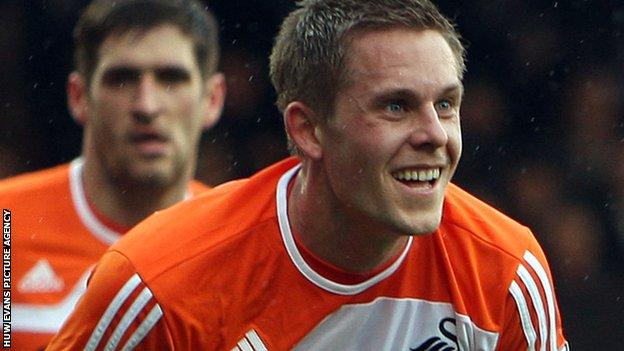 Swansea City midfielder Joe Allen hopes Gylfi Sigurdsson's loan move will be made permanent at the end of the season.

Allen scored Swansea's third goal after Sigurdsson had earlier scored twice in the 3-0 win at Fulham.

The Iceland midfielder has now scored five goals in nine league games since joining on-loan until the end of the campaign from German side Hoffenheim.

"We'd be delighted to keep him. He's contributed so much," said Allen.

"Another two goals here [at Fulham] shows technically and other sides of the game how good he is.

"I don't think out of the young players around there's much better.

"Hopefully he'll feel the same as every other supporter here and will want to stay."

Sigurdsson joined Swansea in January after falling down the pecking order at Hoffenheim, making just seven appearances in the first six months of the season.

The German side paid in excess of £6.5m to Reading for the 22-year-old in August, tying him down to a four-year contract.

Swansea manager Brendan Rodgers hopes Hoffenheim will sell in the summer, but the prudent south Wales club would likely need to double their current transfer record of £3.5m to secure Sigurdsson's services.

The midfielder scored in each half at Fulham on Saturday before Allen struck with 13 minutes remaining to seal Swansea's third successive Premier League win.

Rodgers' side are now eighth in the Premier League and Wales international Allen believes the Swans are getting better with every game.

"I don't think we've performed much better than that," said Allen. "I think we stepped up our performance maybe to a new level.

"The atmosphere in our changing room is that we've done something special here. We're hungry to keep going.

"We've proved this season against the top teams and now maybe belatedly away from home that we can really compete against anyone and pick up results.

"We're looking forward to the home game against Everton and to try and keep this run going."

Sigurdsson was equally happy with Swansea's victory at Craven Cottage, their fourth away win of the Premier League season.

"It was not [an] easy three points but we worked hard for it," said Sigurdsson.

"They're a good team at home but I think after we got three goals [the] pressure was off and we started passing the ball.

"We pass the ball really well but we defend well as a team as well.

"At the moment we're playing with real confidence. We got three points against a top team last week and things are looking good at the moment.

"The main thing is to stay in the league and get to that 40 [point] mark and then we can hopefully enjoy the last few games."