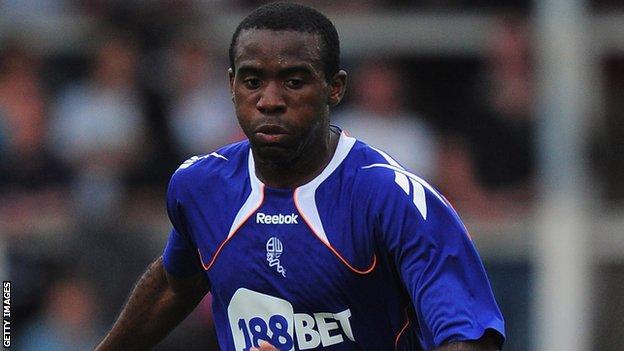 Fabrice Muamba "has been able to recognise family members and respond to questions appropriately", his club Bolton and hospital have jointly said.

The 23-year-old can "breathe independently" without a ventilator but remains in intensive care after a cardiac arrest on Saturday.

A joint statement by the London Chest Hospital and Bolton said he continued "to show signs of improvement".

It added his condition was no longer critical but remained serious.

An earlier statement had said "he is also moving his arms and legs" but "his long-term prognosis will remain unclear for some time".

The former England Under-21 player has been at the hospital's heart attack centre after suffering the cardiac arrest during Saturday's FA Cup quarter-final at White Hart Lane.

His fiancee, Shauna Magunda, the mother of his son Joshua, posted on Twitter on Monday evening: "All your prayers are working people thank you so so much. Every prayer makes him stronger."

A family friend, Curtis Codrington, also tweeted that he had visited Muamba in hospital on Monday night. He said the player was as "strong as an ox".

"He said my name words can't describe what I just saw," he added. "To see his wife, to be by his side was great."

In a statement placed on the club website, Gartside said: "The staff at the London Chest Hospital have been nothing short of exceptional and I would like to thank them all at this ongoing critical time.

"The support we had from Tottenham and our own fans was fantastic - the staff, the fans, the players and the officials at the game - it was unbelievable."

Manager Owen Coyle said: "Everybody is praying for Fabrice, which is very important and that has been a real source of strength to the family."

Meanwhile, Bolton captain Kevin Davies said that suggestions about the club withdrawing from the FA Cup because players were too upset to return to White Hart Lane were "irrelevant" as everybody was focused on Muamba's health.

Bolton's next Premier League game at Aston Villa on Tuesday has been postponed.

Blackburn Rovers manager Steve Kean also said the club would "do whatever we have to do", and would be happy for Saturday's scheduled Premier League match against Bolton to be called off.

Muamba was born in Zaire, now Democratic Republic of Congo, and moved to England aged 11 as a refugee.

In the past the player has rejected attempts by the Congolese FA to call him up, choosing instead to play for England at youth level.

Medics spent six minutes trying to resuscitate Muamba on the pitch after he fell to the ground with no other players around him.

The score was 1-1 when the quarter-final was abandoned after 41 minutes.

It took medical staff two hours to get Muamba breathing again, and they gave him mouth-to-mouth resuscitation as well as trying to revive him with a defibrillator.

Both sets of supporters chanted Muamba's name as he was taken off the pitch on a stretcher.

Spurs manager Harry Redknapp said at the time: "All we are thinking about now is Fabrice and his family."

Referee Howard Webb called the visibly-shaken players off the field after consulting with Coyle and Redknapp and the game was abandoned.