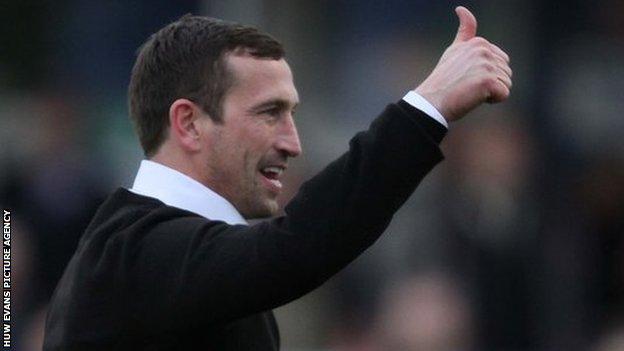 Edinburgh, who won the FA Cup and League Cup with Tottenham Hotspur, has taken Newport to their first Wembley appearance in their history.

County's final opponents on 12 May will be fellow Conference side York City.

"For me to lead a team out at Wembley would be a real emotional day, fantastic. I so wanted this to happen," said Edinburgh.

"This is a sleeping giant this club. Everyone has been fantastic for me since the day I walked through this door."

Newport secured their passage to Wembley after a goalless draw in the semi-final second leg against Wealdstone on Saturday, giving them a 3-1 victory on aggregate.

The cup exploits has provided some light relief for County as they continue to battle for survival in the Blue Square Bet Premier.

Edinburgh joined in October with the club one off the bottom of the table and on a run of 11 games without a win.

Avoiding relegation has been the focus since, and with only a point separating them from the drop zone a crucial run of league games are on the horizon.

"This is a little present back to these fans because this year's been a tough year," added Edinburgh, who had the support of almost 700 travelling fans at Wealdstone.

"But what we've got to do now is concentrate solely on the league and make sure we retain our position in the Blue Square Premier for next season and finish the season with a fantastic trip to Wembley which these great fans deserve.

"This is what you're in football for, memories like this. I said to the players they may never get another opportunity like this in their lives.

"They grasped it and took it on board and they've got a great little trip to Wembley. It's nothing less than they deserve."