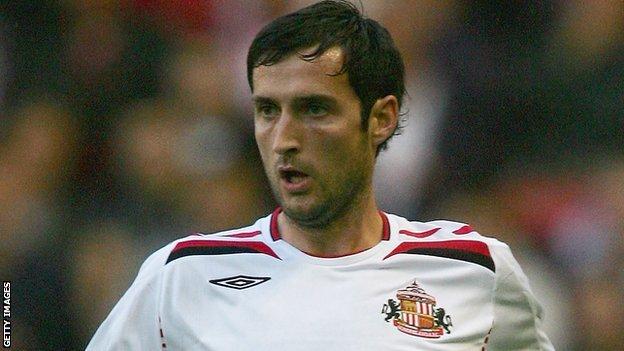 Clive Clarke won his fight for life after collapsing due to a cardiac arrest at half-time during a game. Now he desperately hopes Fabrice Muamba does the same.

Clarke, who was playing for Leicester City, stopped breathing and his team-mates feared he had died. But he says he owes his life to the people who came to his aid in the dressing room at Nottingham Forest's City Ground.

The Irishman, aged 27 at the time, never played football again, but he feels lucky to be alive.

And his thoughts are now with Muamba, who is critically ill after suffering a cardiac arrest during the Tottenham v Bolton FA Cup quarter-final on Saturday, and his family.

"I feel very sad and it obviously brought back a lot of bad memories for myself," he said.

"I'm absolutely devastated for the lad and hope he pulls through. When something like that happens, it puts football into perspective. One life is more important than any football game."

Clarke collapsed while playing for the Foxes in August 2007 in a Carling Cup tie against Nottingham Forest.

"I came down the tunnel at half-time feeling a little bit dizzy, light-headed," Clarke told BBC Radio 5 live's Sportsweek programme. "I went into the changing room, sat down and the next thing I knew I woke up in the back of an ambulance.

"My heart had a cardiac arrest, just stopped in the changing room and I collapsed.

"I think the players and management staff probably feared the worst. They thought that I had probably died in the changing room.

"I was lucky I had good people around me who acted very quickly and saved my life."

The next day in hospital, he started to reflect on what had happened.

"It was real relief," remembers Clarke. "I began to realise how lucky I was to survive. The doctor said that when your heart stops for three minutes, to make a full recovery is very difficult. I've been lucky enough that I have made a full recovery so far.

"It was a relief at first for the first couple of days, then the realism started to kick in that probably my football career was over."

"I have now got an internal defibrillator that was fitted while I was at hospital which hopefully prevents my heart stopping again."

Clarke's career began at Stoke City, for whom he made his debut in May 1999 after coming through the youth system. He spent nine years at the club, playing 262 games and helping them earn promotion to Championship level, but signed for West Ham in 2005.

Having made just two appearances for the east London club, his next move was to Sunderland before a loan spell at Coventry and then one at Leicester.

The former defender was looking forward to continuing his life in football but playing the sport again was deemed too much of a risk by medical staff.

Clarke said: "I can do as much exercise as I want, within reason. But I don't think people realise just how fit you need to be as a professional footballer. Footballers today are super, super fit."

Now he focuses on helping others avoid similar health problems. He is a patron of a charity which raises awareness of cardiac problems in the young, which is called Cry (Cardiac Risk in the Young).

"It was something I had never really heard of much before it happened to me," he said. "Sometimes you have to be affected by these things to realise.

"I think it's a really good charity. It encourages people who play sport to go and have a screening, which doesn't cost an awful lot of money.

"It's just making people more aware that eight to 12 people die a week due to unknown cardiac issues - the heart stops in the middle of the night or whatever. Just a small check can show up problems with the heart."