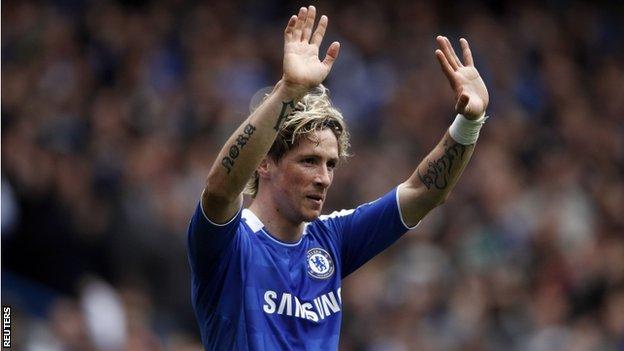 Torres, a £50m signing in January 2011, scored his first goals since 19 October with a double in Chelsea's 5-2 FA Cup quarter-final win over Leicester.

Maybe this season I was playing at a good level and not scoring goals. That's a striker's job

"I needed those goals. I was working so hard to get them," Torres told ESPN.

"In the last month the team is much better. We have more commitment and we've shown in the last four games we want to finish the season well."

Torres claims he feels more comfortable playing under caretaker boss Di Matteo but insists he has been satisfied with his performance level despite his lack of goals.

"Maybe this season I was playing at a good level and not scoring goals. That's a striker's job and if you don't do it people think you're playing badly," he added.

"But the people, team-mates and staff support me and I feel the confidence of the manager now. It's a good time for Chelsea.

"We're much better defensively and if we keep creating this many chances, it will be difficult to beat Chelsea."

Di Matteo stated he never doubted Torres would be able to regain his potency in front of goal.

The interim manager had said he thought Torres was suffering from a "psychological problem" but was always a valuable part of the side.

The Italian commented: "I think the whole team, the club and supporters are happy [for Torres]. He works so hard for the team, he is a great team player.

"You get rewarded when you work hard in life and I think we are all happy that he helped us win.

"Hopefully his confidence is going to be high. I didn't mind when he wasn't scoring because as long as we win as a team that is what matters to me."