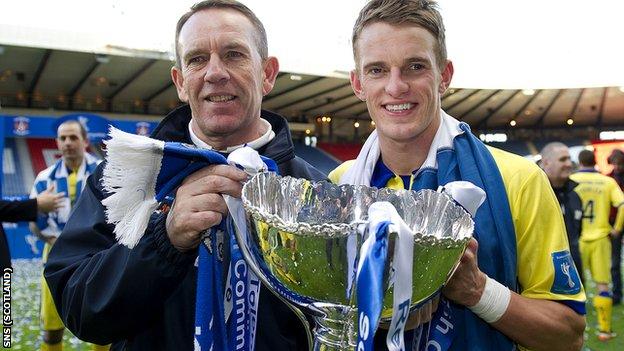 "You have to believe to achieve and we worked hard on getting the boys to believe," he told BBC Scotland after the 1-0 win over Celtic at Hampden.

"Celtic are a young team and there is always that strain on them to succeed, so we talked up their Treble chances.

"I knew it would be difficult for them if we kept the ball because Celtic were the team under pressure."

Kilmarnock goalkeeper Cammy Bell several fine saves and substitute Dieter Van Tornhout, celebrating his birthday, won it for the underdogs with a header on 84 minutes.

"Celtic are a fantastic team and they will go on to to be very successful," added Shiels.

"But they were gone in the last 10 minutes."

We are thinking more about Liam (Kelly) than our triumphalism

Despite Killie lifting the trophy for the first time, Shiels later revealed that the dressing room was "despondent" on hearing the news of midfielder Liam Kelly's father being taken to hospital after collapsing at the end of the game.

For several minutes after the final whistle paramedics treated Kelly senior right beside the Kilmarnock dugout.

Kelly did not join in the celebrations and went up the tunnel.

A sombre Shiels explained: "I am all over the place, I really am.

"It happened right beside this dugout and I am only doing this press conference out of respect to you (the media) so I hope you appreciate that.

"I don't know the medical term, but it is a heart attack, probably. He is away to hospital and the family has gone with him.

"I have gone from so high an emotion to so low an emotion.

"We are not sure of the outcome but he is very seriously ill and that's a tough emotion after going up to one of the best moments of our lives.

"The dressing room is very despondent and I don't know why the man above sends down these messages to us.

"We are thinking more about Liam than our triumphalism."

There was a fright for Kilmarnock in stoppage time when Anthony Stokes went down in the penalty area under a challenge from Michael Nelson.

However, referee Willie Collum chose to book the Celtic striker for simulation, much to the annoyance of Celtic manager Neil Lennon.

Bell was given the man-of-the-match award, having denied Gary Hooper and Anthony Stokes with excellent first-half saves as well as making other important interventions.

"It's amazing, I feel very emotional at the moment, brilliant, fantastic," Bell told BBC Scotland immediately after the game.

"It just shows how much commitment the boys had, we did it for the manager.

"Everybody dreams, but we are realistic. I think the boys were fantastic.

"I think we deserved to win, I had a few saves to make, but you are going to have to against Celtic."