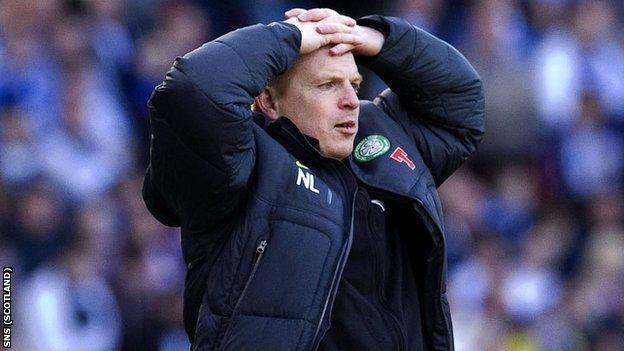 Anthony Stokes went to ground in the box as he was challenged by Killie's Michael Nelson but referee Willie Collum waved away spot-kick appeals.

The incident took place after Dieter van Tornhout headed the only goal.

"You've got to take your chances and we missed simple chances. We should've had a penalty," Lennon told BBC Scotland.

"It's a penalty and a sending off at a big moment in the game. I'm not saying we would've scored the penalty but I think the referee's got that one completely wrong."

Lennon cited missed opportunities for Gary Hooper and Stokes as he reflected on Celtic's defeat, which ended his side's hopes of completing a domestic treble.

Any1 that thinks I wud dive wen I'm 1 on 1 wit d keeper needs their head checked. So disappointed but we still have so much to play for

"If we had got one, we might have gone on to win the game comfortably," Lennon told BBC Scotland. "We conceded a poor goal from our point of view.

"We dominated the game so Kilmarnock can count themselves pretty fortunate that they've won the game. And maybe that's down to a lot of luck on their part and poor finishing from us.

"We couldn't have played that bad. He [goalkeeper Cammy Bell] has made six or seven great saves to keep Kilmarnock in it. That happens in a cup final.

"I'm very disappointed for our players but we've got a league championship and a cup to win so we'll lift them again and go again."

"My sympathies go to [Liam] and his family," added Lennon. "All my thoughts go with the family.

"It makes my pain pale into insignificance to what he's feeling."