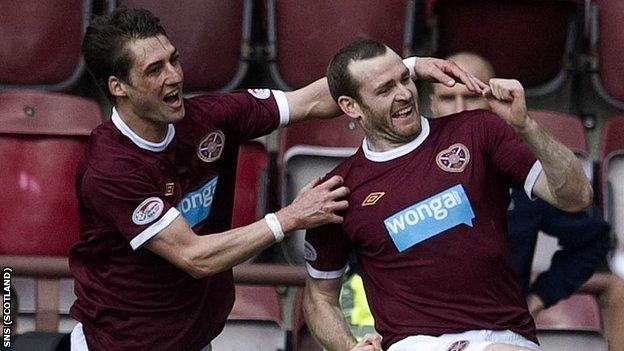 Hearts manager Paulo Sergio feels his side have all but secured a top six place in the Scottish Premier League after beating Hibernian.

The Tynecastle side's third Edinburgh derby win of the season was achieved through goals by Craig Beattie and Suso Santana.

"It's the first time that we've won the three derbies, nobody has done that before so it's a good record for us."

Sergio described his side's goals as "great moments of football and added: "It's a victory with very good flavour because Hibs are making these victories harder and harder.

"We had to suffer, we had to defend very well in the second half. Everybody fought together and I'm very happy with that.

"I've very happy for the goal of Suso because people shouldn't forget that Suso has been fighting all season with his knee problem. So, he deserved it because he's a hard worker, a great guy.

"I'm very happy for our supporters. I believe with this three points we've almost achieved our target to finish in the top six of the league and it was very important for that principally."

"We didn't compete, we didn't start well and the game could've over at half-time in fairness," he said.

"Second half was a lot better, we created a few chances and could've nicked a point I suppose but whether we deserved that or not, I'm not sure.

"I'm disappointed because we let ourselves down and the suppoters.

"I felt we had players that were willing to scrap and fight and we didn't do that in the first half. It shouldn't take us to go in at half-time and rectify that for people to come out and roll up their sleeves.

"It's the results against other teams that are going to make our break our season at the moment."