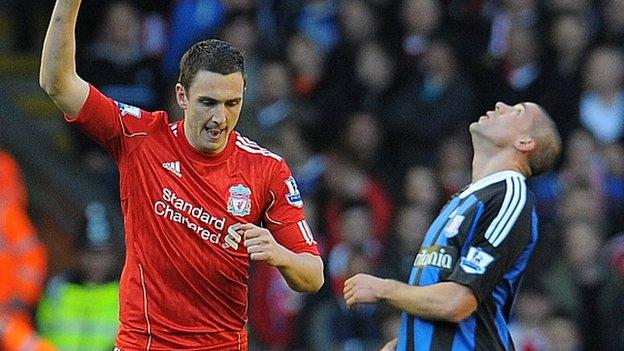 Downing cut in from the right to drill home only his second goal since signing from Aston Villa for £20m in July.

"It's his first year with us and that is sometimes a difficult one to get yourself through," said Dalglish

"But he was man of the match in the Carling Cup final and he has got us in the FA Cup semi-finals with that goal."

Downing's only previous goal for Liverpool came against Oldham in the third round of the FA Cup.

But Dalglish believes the England international is emerging as an influential player for the Reds as they look to follow up their Carling Cup success with a first FA Cup since 2006.

Downing's strike settled a tight game in which Stoke made life difficult for Liverpool in the first half.

Luis Suarez gave the hosts the lead with a fine 20-yard curler, but his goal was cancelled out by Peter Crouch three minutes later.

The Reds dominated the second period but had to weather a barrage of high balls into the box in the closing stages to book a place in the last four.

"If you don't put a decent performance in against Stoke you don't get a result," said Dalglish.

"Great credit goes to Stoke because they worked really hard, especially in the first 20 or 30 minutes when they really closed us down and made it difficult.

"But we finished the stronger team. I thought we defended really well and we weren't afraid to put our bodies on the line."

Liverpool will play the winners of a replay between Everton and Sunderland at Wembley on the weekend of 14-15 April.

"Whoever we get it's going to be tough," said Dalglish. "Merseyside will be hoping Everton get through and they can all have a day out again but it is a real difficult place to go and get a result at Sunderland.

"But that is not our problem - that is theirs to sort out."