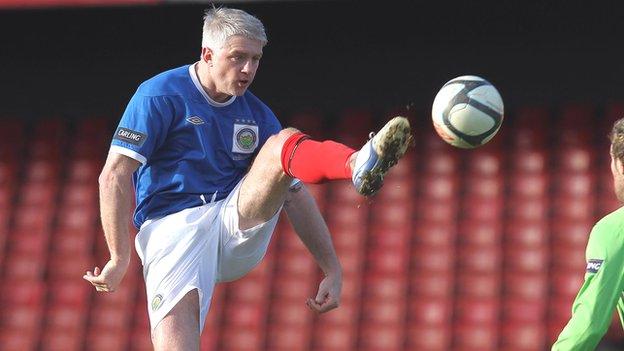 City struck late to secure a 1-1 draw in the first leg at Windsor Park.

"Derry will think they are favourites so it will be a tough encounter - we're looking forward to it," said Jeffrey.

In the other quarter-finals Glentoran are 2-0 down to Sligo, Cliftonville trail Shamrock Rovers 2-0 and Bohemians and Crusaders are level at 0-0.

The Glens and Reds are both at home for the second leg while the Crues make the visit to Dublin.

Linfield defender William Murphy was left out of the first leg against the Candystripes but the veteran is poised to start at the Brandywell.

"He will have an extra days rest this time and should be fine to play," Jeffrey told the club website.

"He has been sensational this season and I can't praise him enough.

"Derry are a strong side and they have a good mix of youth and experience. It should be quite a game."

Blues striker Mark McAllister is a doubt with an ankle injury while a hamstring injury rules out Aaron Burns.