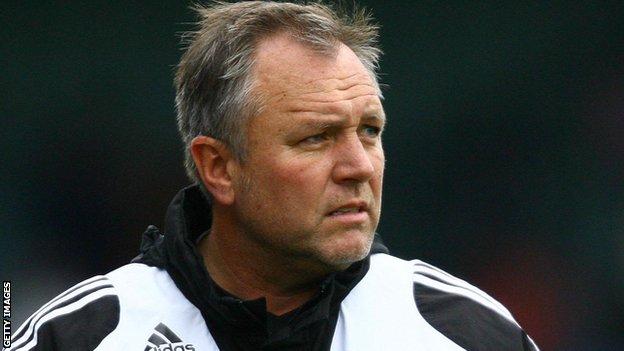 Macclesfield Town chairman Mike Rance has said sacking Gary Simpson is one of the hardest things he has ever done.

Rance asked Simpson to step down after a 16-game winless run in League Two that leaves the Silkmen only out of the relegation zone on goal difference.

"Gary's and my history with the club are intimately bound together with the events of the last two years," he told BBC Radio Manchester.

"I can tell you this was one of the harder things I've done in my life."

Simpson took over at the Moss Rose following the death of his close friend Keith Alexander, initially in caretaker charge, but took the role permenantly in April 2010.

He lead the club to their highest finish in six seasons last year, in a campaign again marred by another death, with midfielder Richard Butcher passing away in January.

He was rewarded with a new two-year contract at the end of last season, but despite an FA Cup run where they drew 2-2 with Premier League side Bolton, the Silkmen have struggled in the league, managing just eight wins.

"When you're doing something like this there is never a right time," Rance added.

"Gutted to hear about Simmo. Want to thank him for all he has done for me. Hope he gets back in the game soon," left-back Carl Tremarco

"Like to thank Simmo for all he did for me and the lads. Wish him all the best. Let's hope we can get out of this mess," right-back Elliot Hewitt

"Gutted for Simmo. Top man, thank him for my chance. Emotional after all he's been through with Keith and Butch," midfielder Sam Wedgbury

"Gary is a friend and a colleague and I'm pleased to say as we go forward he will remain a friend.

"He's a top guy and he'd done absolutely everything he could possible do for the club and he understands the reasons why we've done what we've done, and I wish him all the best for his future."

With only nine games of the season left, Rance said they expect to have a new manager in place soon.

"All will become clearer later in the day," he stated.

"We've thought this through and we're in control of our own destiny to a certain extent and hopefully we'll go to the Don Valley Stadium as prepared as we can be given the circumstances."