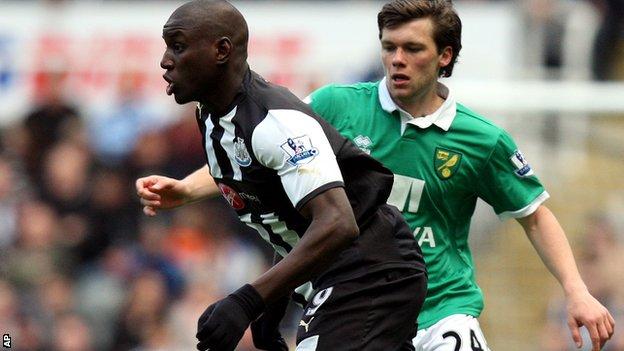 Norwich manager Paul Lambert has backed midfielder Jonny Howson to establish himself as a "top player" for the club.

Howson made only his second start for the club since joining them from Leeds in Sunday's 1-0 loss to Newcastle.

The 23-year-old missed part of the season because of a knee injury and was recently troubled by illness.

"He was brilliant. I thought Jonny Howson showed everyone that he's going to be a top player for this club," Lambert told BBC Radio Norfolk.

A product of the Leeds academy and a former England Under-21 international, Howson made almost 200 appearances for the Yorkshire club.

But his contract was due to expire in the summer and in January, they agreed to sell him to the Canaries for an undisclosed fee.

Following the game at St James' Park, Howson insisted he was still coming to terms with the Premier League after a stop-start opening to his spell at Carrow Road.

"There were little spells where I think it went well," he said.

"I'm still not up to the match fitness that I'd like to be, but that'll come in time."

He insisted the mood in the dressing room remained "very positive" despite four defeats in their last five games.

"I've only been here a little while, but the lads have done better than maybe people expected from the beginning of the season.

"Everyone works hard every single day and I think we'll continue to do that," Howson added.