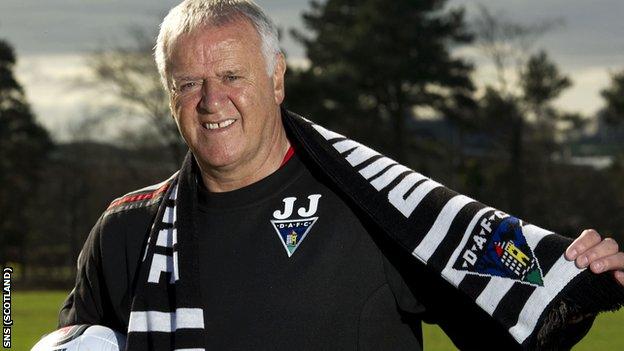 Jim Jefferies aims to steer Dunfermline to safety after being appointed manager at East End Park.

The 61-year-old has agreed a 15-month rolling contract with the Pars.

Dunfermline are four points adrift of second-bottom Hibernian with only eight games left in the Scottish Premier League.

"I wouldn't have taken the job if I didn't think there was a chance," he said.

The former Falkirk, Hearts, Bradford City and Kilmarnock manager said he was aware of the scale of the challenge after succeeding Jim McIntyre.

"Hopefully, the experience I have can help them remain in the Premier League," said Jefferies.

"They are all tough challenges. That's the life as a football manager - you can't pick and choose.

"It's what you get offered and, obviously knowing Dunfermline over the years, it's a club with great tradition and a great challenge."

Dunfermline chairman John Yorkston said he was delighted with the club's appointment.

"Jim has a great track record of developing players and bringing on players and we are delighted to have him," he said.

Jefferies said he had a couple of other opportunities but was delighted to agree terms with the Pars.

"The initial suggestion was that they were looking for somebody short-term and, when I was approached, I didn't think at this stage of my career that was something I was interested in," he added.

"I turned down their offer of a short-term, but they offered me long-term after I explained why I did not want it short-term."

Dunfermline, who have not won at home in any competition all season, host St Mirren on Saturday.

"It is massive, a cup final," said Jefferies. "We have eight cup finals until the end of the season.

"It's time they won at home and I'm sure, if they did that, it would be one massive boost in confidence in the players."

Jefferies will retain the services of caretaker Gerry McCabe and now faces a scrap with his long-time managerial partner, Billy Brown, who is now assistant at Hibs.

"Everybody knows I worked with Billy Brown for some time, but he's already in a position," said the Pars manager.

"So I've known Gerry for a number of years and I think it is an advantage to have Gerry there because he knows the players inside out."

Yorkston has successfully signed up the man he made his prime target as he sought to end a run of eight games without a victory.

"We are delighted to secure the services of someone with a proven track record and vast experience in management," he told the club website.