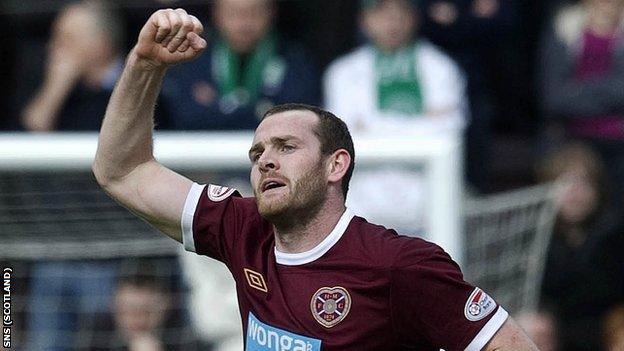 Hearts striker Craig Beattie has yet to decide where his long-term future lies after making an impressive start to his Tynecastle career.

Beattie netted the opener in Hearts' 2-0 win over city rivals Hibernian, a week after scoring against St Mirren.

"For my first Edinburgh derby it was fantastic," Beattie told BBC Scotland.

"I have not made my mind up yet. I have not even spoken about it with my family. I still feel the best years are still ahead of me."

The 28-year-old's strike against Hibs helped Hearts maintain a 100% record in this season's derbies.

"It was a great ball from Ian Black," Beattie said of the goal. "We had worked on that type of ball during training.

"All I had to do was control it and I managed to slip it through the keeper's legs."

The former Celtic striker is under contract at Tynecastle until the end of the season after joining last month as a free agent.

He left Celtic in 2007 to join West Brom and since then has spent time at Preston, Crystal Palace, Sheffield United, Swansea and Watford.

"There is still a lot more to come from me," he said.

"For one reason or another I have picked up the odd injury along the way.

"In some ways I have been a victim of my own success with a couple of teams I was at gaining promotion into the Premiership and the team re-evolving.

"I have a lot more of a physical presence about me now. My goals to game ratio is quite good.

"It's up to me to get some games and goals and then make my mind up from there."

Beattie has seven Scotland caps, scoring once, and is keen to add to those if national boss Craig Levein should make the call.

"It's a massive honour to play for your country and it would be great to do so again," added Beattie. "I have got no doubts that Craig is very much aware of what is going on in the English and Scottish leagues.

"I am sure he will have watched some of the games and seen me knocking in a goal or two in recent games. If the call came I would be delighted to answer it."