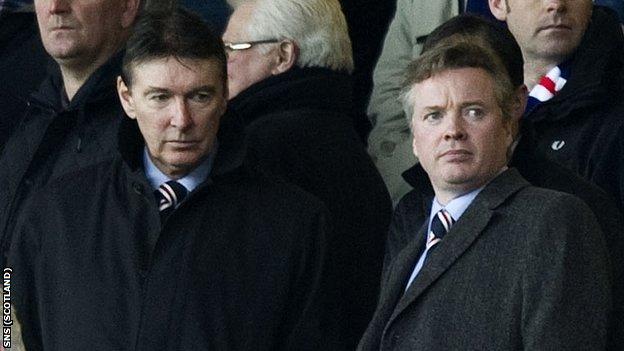 An aggregate defeat by qualifying opponents Malmo meant Rangers missed out on a third successive year of group stage involvement.

And Smith indicated this had contributed to the club eventually going into administration.

"It looked like there was a dependency on being in the group stages," he said.

"I suddenly noticed when we went out the Champions League, there was a panic that came in from the owner that this was going to be a tough year because of it.

"The income this year is about £35m, the outgoings are about £43m. In the previous two seasons, Rangers won the league and qualified for the Champions League [group stages].

"The income from going automatically into the Champions League [group stages] went up from about £40m to £56m and then £52m.

"In both those seasons Rangers made a profit. That's why, at that time, the people who were in charge of Rangers were able to pay off some of the debt. The debt came down from about £23-24m to £18m.

"If you don't get that [Champions League money], the income doesn't match the outgoings."

Gordon Smith was speaking on BBC Radio 5 live's "Rangers - What Next?" Dowload the podcast