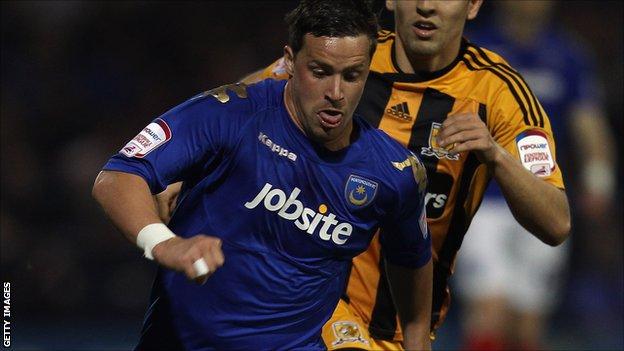 The win lifts Michael Appleton's side off the bottom of the table with Pompey now just three points from safety after two wins from three games.

The Tigers remain two points outside the play-off places but boss Nick Barmby will be worried that a third consecutive defeat represents an untimely slump at a crucial stage of the season.

Pompey started brightly with Tal Ben Haim sending a speculative effort wide while Ward dragged past the post and Varney agonisingly failed to make contact with a fizzing Maguire cross, but Portsmouth's pressure told in the 21st minute.

A measured pass from Scott Allan found Maguire, who raced into space and lobbed the stranded Mannone from a tight angle.

Mannone got down well to keep out a rasping Maguire effort moments later before he was forced to pick the ball out of his net for the second time in four minutes.

Maguire was the provider this time as his low centre caused panic in the Hull box. George Thorn took control and cut back for Ward to side-foot home.

Barmby's side almost reduced the arrears immediately as Fryatt capitalised on an error from Karim Rekik to bring a splendid save from Ashdown.

Hull displayed a good deal more intent as the second period got underway, but their attacks remained largely disjointed. By contrast, David Norris, Ward and Maguire all went close in a flurry of Pompey pressure around the hour.

Mannone stopped Maguire doubling his personal tally once more in the 69th minute when he clawed a 25-yard drive out of the bottom corner.

At the other end Robbie Brady curled a free-kick narrowly past the post, but Hull's late rally failed to materialise.

Portsmouth substitute Kelvin Etuhu almost added gloss to the scoreline when Maguire released him on the counter-attack, only for Jack Hobbs to get back well and produce a last-ditch block.

"I was delighted. It was total dominance from minute one to 95. It was the best performance since I have been in charge by an absolute mile.

"I have never not believed. There are going to be lots of twists and turns and ups and downs in the next seven games. Who knows how many points we will need to stay up?

"Chris Maguire has had a fantastic night. He really enjoys playing and gets the same kick out of blocking a ball down the line as he does scoring goals."

"Portsmouth were the better team. We were not good enough and they wanted it more than us.

"I apologise to the fans who made the long trip down. It was not us, so I am disappointed.

"It is not over and we are still in with a chance [of getting into the play-offs] so we will keep fighting. We will never give it up. Whoever is in the team I expect them to give a performance and win."