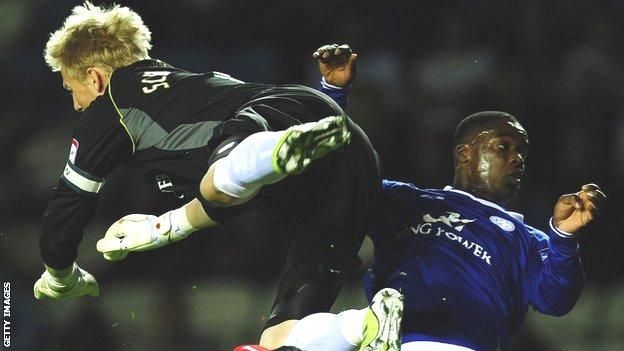 East Midlands honours were shared in a stalemate which does more for Forest's survival bid than it does for the Foxes fading hopes of reaching the play-offs.

Leicester went close to a first-half opener but Sol Bamba and Ben Marshall were both denied by keeper Lee Camp.

Forest, who hit seven on their last away trip at Leeds, went closest in the second half with an Adlene Guedioura header that clipped the crossbar.

A point leaves Steve Cotterill's side five points above the drop zone.

But it is a missed opportunity for Leicester, who are four points off the final play-off spots.

Forest had the first real opportunity when Dexter Blackstock's cross found its way to Guedioura but his shot was saved by Kasper Schmeichel.

Bamba and Marshall hit spectacular long range shots that Camp did well to keep out.

Ivory Coast defender Bamba then set up a good chance for Lloyd Dyer but his low shot was just off target.

There were few chances in a cagey second half - the best being Guedioura's flick from an Andy Reid free-kick that glanced off the bar.

Leicester manager Nigel Pearson: "In some ways it is two points dropped but Nottingham Forest set out to not get beaten and they achieved that so we have to give them a bit of credit.

"But we are six points off fourth place. It is one of those where we have to keep our focus on what is going to happen in the next few games.

"I think it will go down to the final game to determine the sixth position and we have to make sure we are in contention for that."

Nottingham Forest manager Steve Cotterill: "I am pleased with the point. It has got us to that 40-point mark which is important psychologically. With it being our game in hand we wanted to get something from it.

"It was very disciplined, they were magnificent. I think we have looked a proper team for a while now, which is why the results have changed.

"We have got a little bit of competition now as well which keeps people on their toes."